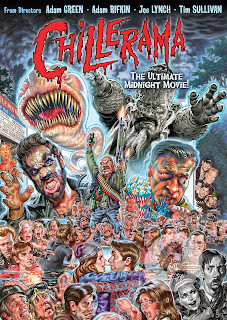 Yet another horror anthology film, but this is is oh so different. And excuse me, I have to make a lame joke here. *ahem* Wouldn't be awesome if Wilmer Valderama was in "Chillerama"? There, done.

There's 3 (technically 4) stories, all of them short horror movies being played at a drive-in. The drive-in is closing down and this night is their last night, so the owner Cecil (Richard Riehle) is showing four obscure films as one last "fuck you" to the people that bought the drive-in and forced him to close it.

The first film is called "Wadzilla". Yes, you heard me correctly. It's gonna be THAT kind of movie. Anyway, "Wadzilla" is a play on old 1950's monster movies and it's pretty funny. Laura Palmer's father plays a doctor who gives Miles some medicine to boost his sperm. But the medicine causes his sperm to grow into size and eventually attack New York City.

The ending is really hilarious. I won't say too much but if you ever wanted to see The Statue of Liberty give a strip tease, this is the movie for you. What I loved about this movie is every other scene features all the characters smoking on screen. Of course, this is a light jab at the fact many movies today can't feature smoking and how everybody seemed to smoke in the '50s.

The stuff around the four films follow a group of movie nerd friends and them being in love with each other. Ryan is in love with the drive-in concession stand chick Desi, while Tobe and Mayna have feelings for each other.

The next movie is called "I Was A Teenage Were-Bear". And I'll be honest, this is the weaker of the three (maybe 4) stories. It really doesn't know what it wants to be. It's a beach blanket movie mixed in with a teenage monster movie. There's Ricky, the all-American high school kid who is dating Peggy Lou, but he may have a deep dark secret.

Ok, he's gay, alright? The entire movie is one big gay joke. And funny enough, it's a musical. I'll admit the songs are funny and catchy. Anyway, Ricky is bitten by Talon, the gay greaser guy and he turns into a "were-bear". Since I said this was one big gay joke, "bear" in this sense refers to the big hairy gay guys. There's not too much more I can say about this story.

Also happening around the 3 (4) features is this dude who I thought was Ray Liotta who dug up his dead wife and tried to fuck the corpse. But the dead wife came back to life, bit off his balls, and is slowly turning him into a zombie. To help heal his zombie wounds, Ray Liotta uses popcorn butter, which then gets used on the customer's popcorn.

The third story, easily the best fucking story in this movie, is "The Diary of Anne Frankenstein". So it's revealed that Anne Frank and her family are distant relatives of Dr. Frankenstein (makes sense if you think about it) and Anne finds the good doctor's medical journal.

Then Hitler shows up, kills The Franks, and steals it. I want to mention that Hitler is played by Joel David Moore. If you know who that is, that should give you some idea of how funny this whole bit is. What makes this even more funny is the fake German they speak. Instead of using actual German, they just say gibberish and mix in things like "Goldie Hawn" and "Vincent Van Gogh".

So Hitler uses Dr. Frankenstein's journal to create a Nazi monster. Who looks Jewish. And named Meshugannah. And I'm not even fucking kidding when I say Meshugannah is played by Kane Hodder. You have NO FUCKING IDEA how awesome that is. Anyway, things kinda go wrong and you need to see all the gags for yourself.

What's great about this is since the movie features movie nerd characters, all the dialogue is nothing but movie quotes! I mean you got "GET TO THE CHOPPA" to "SAY HELLO TO MY LITTLE FRIEND", it's so fucking awesome. I won't even spoil all this for you. Just go see it now. It is on Netflix Instant Watch.

And that's it. Thanks to the three of you who voted for this. I'm guessing this didn't get a lot of votes cause people didn't know just how fucking awesome this movie was. But seriously, I think I have a new favorite movie.

PS: I SO wanted to give this five stars, but since "Were-Bear" was kinda weak, I had to deduct a star. Kinda sad, really.
Posted by Jason Soto at 7:00 PM

Just finished it. I don't think I loved it as much as you did, but it was still pretty excellent.

Wadzilla was pretty good and has some fun puns.

Were-Bear nearly fucking killed the entire movie for me. Oh man, it was painful and dull and dragged everything down. I didn't even like the songs.

Anne Frankenstein was brilliance on screen. I would recommend people this movie for this segment alone. That being said...

...the main "Zom-B-Movie" segment was really good, too. Probably my second favorite. And the rapid-fire use of movie quotes in the last part was awesome.

However, I felt the movie as a whole (with the exception of Anne Frankenstein) relied WAY too heavily on dick and fart (and shit) jokes. Literally. That was almost the entire movie, and it got pretty old after a while. But on the whole, the movie was really good.

I also stumbled across some interesting trivia. At least two of the directors and one of the co-stars (Lin Shaye) were all involved in Detroit Rock City. Weird.

Yeah I agree. If "Were-Bear" wasn't in the movie and it was just the three stories, this would've gotten five stars from me. I laughed through the whole thing and LOVED the jokes, gags, and quotes.

Even during the small "Defication" whatever scene, Felicia walked in during that part and laughed at the poop chasing the nurse. And she normally doesn't laugh at the stuff I find funny.

I do agree with the dick/fart/shit jokes but I think watching a movie like that every now and then is fine. For every "Citizen Kane" there needs to be an entire movie about pooping. That's all I'm saying.
-Jason