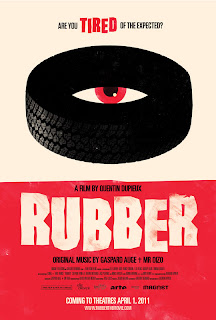 Polonius:
[Aside] Though this be madness, yet there is method in't.

An aquaintence of mine very recently told me a delightful story about his siblings visiting the city of El Pueblo de Nuestra Señora la Reina de los Ángeles del Río de Porciúncula (which translates to "The Town of Our Lady the Queen of the Angels of the River Porciúncula) and how he just happened upon a delightful motion picture.

The sibling of my aquaintence said the motion picture, while not one to be found easily in the trade papers you or I often frequent, was one that many of us who is quite fond of such risque cinema should indeed see for yourself. That motion picture is titled: "Rubber".

"Rubber" (or "gaucho" or "goma" if you will) is a motion picture written and directed by Quentin Dupieux, a French gentleman who moonlights as a musician. The motion picture takes us on a daring ride of the macabre and has us, the audience, asking "when is enough?"

The start of the motion picture depicts a gentleman in a policeman's uniform arriving at the scene in the trunk of a car. This is a clear indication that this policeman does not follow the rules of the road and disagrees with the strict seatbelt laws this country has set upon us. "I shall overcome this by riding in the trunk" he surely thought to himself. "For it is there that no one will know that I am, in fact, NOT wearing a seatbelt."

Mr. Policeman as I will call him because his name just happens to escape me at the moment, explains the motion picture directly to us. This is a quaint device. I only wished more motion pictures used this device. Imagine if, say, Jason Voorhees would put down the machete, pick up a cup of Earl Gray tea, and tell us WHY he proceeds to brutally murder helpless teenagers.

Mr. Policeman explains that motion pictures don't make sense and cites many examples, including "E.T", "The Texas Chainsaw Massacre", and a personal favorite of mine "Love Story". The film we will be seeing tonight is one such film that will be pointless and not make sense.

It is then revealed that there is a group of people, holding binoculars, about to watch said film with us. The group consists of the usual bi-standers who watch such films. You have the two bratty teenage girls, the two "movie geeks" if you will, and a mish-mash of other people.

Then our real story begins when we meet Robert, a lonely car tire. Obviously, the tire represents a human being. It is suddenly thrust into a world in which he does not understand. The first object he encounters is a water bottle. Water, being the source of all life, is important for all living things to continue living. But here, the water bottle is empty, much like Robert. He is only a tire, therefore is incapable of expressing emotions and thoughts.

Robert, however, isn't completely without talent. He does have the ability to make things explode by merely "looking" at it. He first discovers this talent with a beer bottle. The obvious message here is that all alcohol is evil and must be dispelled.

In between scenes of Robert discovering his new life and the "watchers" saying things you or I would say if we were to watch this movie together in my den one fine evening, we meet a beautiful young lady who is driving. Her name is unimportant, which clearly means that women, through the eyes of Mr. Dupieux are just people to him. How bold of him, I must say.

The woman, whom I'll name Maria, is driving through the desert when Robert spots her. It is clear Robert is in love with Maria, but alas! He has no penis in which to make love! How will he show his affection to Maria? I know, I shall follow her!

Maria and Robert end up in a hotel and we do get a very naughty scene in which Robert spies on Maria getting naked. We do see her tush but I had turned away. I must save such things for marriage, you know. The "watchers", however, keep on watching. It is clear the watchers represent Joe and Jane Everyday Movie Watcher and are not of the upmost stature like myself. They are the ones who see "Transformer" movies and "Alvin And The Chimpmunks".

It is then the motion picture takes an even more bizarre turn when we meet a skinny nerdy man, who plans on poisoning the "watchers". All the "watchers" take the poison but one man: an older gentleman in a wheelchair. This obviously represents how the filmmakers today just want to poison the minds of Joe and Jane Everyday Movie Watcher and they'll "eat up" anything Hollywood gives to them. The mere fact the poison is put in a turkey, representing them "gobbling" all this up, makes this clear.

But what of the old man? He doesn't look like a dandy chap. He's wearing a plaid shirt (PLAID!) and a baseball cap. Who does he represent? He is a mystery. We may never know the answer to this. Then the film does something most daring.

The actors IN SAID MOTION PICTURE just decide to stop being in the movie. This represents how tired they are of pretending to be something they are not and how much they hate Joe and Jane Everyday Movie Watcher! But thanks to the older gentleman, they must continue! Even if there's only one person in the audience, the show must go on! Excelsior!

Now that the motion picture shall continue, Robert goes on the most brutal killing spree and it's up to our policemen and women to stop him! They try to fool the tire by having a manniquin stand at his front doorstep with a bomb, in hopes of tricking him to blow himself up. It's quite a complicated plan. And even our older "watcher" takes issue with this.

Wouldn't it be great to ask the movie characters why they do the things they do? OF COURSE! This represents the movie watcher NOT TAKING IT ANYMORE! How could I be so blind? STUPID, STUPID! Before I go beat myself up for missing such an obvious metaphor, I shall finish this review.

Robert causes the manniquin to explode but he doesn't die. The policeman, tired of all this tire business, just simply walks into the residents and shoots Robert until he is flat and dead. But, alas, we have a twist ending. Robert...is now a tri-cycle! This obviously represents his "rebirth" by being born into a child's toy.

Robert the tri-cycle moves along his merry way, enjoying himself when suddenly he spots OTHER living tires! He is now no longer lonely and needs the companionship of Maria! Where does Robert and his friend go? To Hollywood. OBVIOUSLY this represents the film heading to Hollywood, the place motion pictures are made. And his friends all represent all the sequels that Hollywood will make from this movie.

And with that we come to a close. Oh this film is such a delight. I love all the double meanings, the metaphors, and symbolism. Of course there will be many detractors who will downplay this film and take it at a "horror" level. Those brutes do not know anything about the art of filmmaking. I applaud Mr. Dupieux for taking a brave step in making this motion picture. Bravo, dear sir, bravo!

Berowne:
Why! all delights are vain, but that most vain
Which, with pain purchas'd, doth inherit pain:
As, painfully to pore upon a book
To seek the light of truth, while truth the while
Doth falsely blind the eyesight of his look.
Light, seeking light, doth light of light beguile;
So ere you find where light in darkness lies,
Your light grows dark by losing of your eyes.

I actually enjoyed following Robert around, specifically his first movements and then expanded adventure. I hate to say it, but in these scenes, there was something very Malice-like about the way it was brought to the screen.

HOWEVER, all the other additional nonsense pretty much ruined the movie for me.

I love how you totally ripped off my Troll 2 review. (:P)

Seriously though, it's funny that you spent the entire review giving purpose to a movie whose entire purpose is to not have purpose.

My opinion on the movie is actually the complete opposite of Red. I felt the Robert stuff was kinda boring, but the nonsensical stuff and the meta stuff was my favorite part.

Nick: I know the cop said at the beginning of the movie all that stuff about this movie meaning nothing, but I feel in a way the guy who made the movie really thought he was being clever with all these symbolic things that could be taken out of everything in the movie.

And I too enjoyed the weird non-sense parts in the movie.
-Jason

Awesome, and I'm glad you liked the movie. Shakespeare was a nice touch.

Btw, if they ever made a film where halway through, Jason puts down his machette and discusses his motivations over a nice cup of Earl Grey, I'd be the first in line to see it.