This movie probably doesn't get talked about a lot, but I think more people should see it. It's an underrated gem. Starring Gene Wilder and Richard Pryor, it's about two guys who are mistaken for bank robbers and sentenced to however long in prison. Then hilarity ensues. There's also a plot about a rodeo, but you'll have to see the movie to understand it. Anyway, you really should check out: 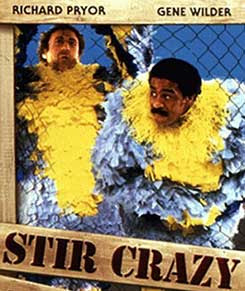 Last week I was evil and gave you three hard options to make up for missing a week. How did you guys do?

Here's last week's answers:
Hard #1: A group of people go into the jungle and are terrified.-Anaconda
Hard #2: They find some messed up people when they go exploring.-The Descent
Hard #3: This guy had an amazing life.-Forrest Gump

With that out of the way, it's back to a normal game...FOR NOW!
Hard: A criminal performing community service shows off his special skills!
Medium: Him and him along with the first him and her and him and another him all have adventures that intertwine.
Easy: Two dumb guys lose something and find a lot of something else.

Good luck! And there's a reason why hard is hard and medium is medium!
-Jason
Posted by Jason Soto at 10:43 PM

And Nick gets the easy! Way to go!
-Jason

BAM! Steve got it! I knew it wouldn't be THAT hard!
-Jason