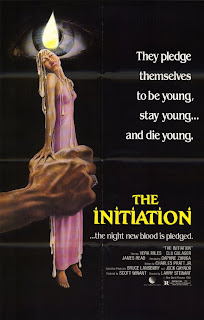 I've never been to what I guess you'll call a "real college". Y'know, the type where you move away from home, the campus is the size of a city, there's parties every weekend, and of course there's fraternities and sororities. If I ever did go to a real college, I certainly would never try to be in an fraternity, since majority of guys in frats are royal douchebags. But I picture it exactly how Asher Roth describes it.

Anyway, "The Initiation". It stars Daphne Zuniga, who I know as Princess Vespa from "Spaceballs" but most non-nerds might know her from "Melrose Place". I've never seen "Melrose Place" but apparently I'm missing out. Anyway, Clu Gulager is also in this movie. I just felt like pointing that out.

The start of the movie shows a little girl in bed waking up. She gets out of bed, walks to her parents bedroom where she spots two people fucking in a way you really only see in pornos. The woman getting fucked is surprised to see the girl and stops with the sex. Then it gets confusing for a moment when another guy in a suit shows up out of nowhere, fights the guy fucking the woman, then suddenly is lit on fire. The woman carries the little girl away as the guy burns to what I assume was death.

Then Daphne Zuniga wakes up and she's an adult in a sorority, pledging for them. It's the start of their "hell week". Oh shit, NOT again! Stay away, Linda Blair! Anyway, Daphne IS Kelly, a rich girl in a rich family. Her dad is Clu Gulager and he owns several businesses, including a mall. Megan, the head of the sorority, wants Kelly to steal her dad's keys to the mall so they can sneak in one night and pull a prank.

Then out of nowhere it turns into "One Flew Over The Cuckoo's Nest". We go to a sanitarium and the bitchy nurse walks through just being a bitch to all the crazy people, really for no reason. To prove she's a bitch, she yells at a gardener FOR NO REASON! He's just gardening and she goes "HEY STOP GARDENING AND GO BACK TO MEXICO! Oh you're white and you're a patient here. I'm sure nothing will happen to me then."

Hey guess what? Later that night she's killed by a gardening tool. Good job, Nurse Bitch. Clu Gulager gets a call that some inmates escaped the sanitarium. So he owns that place too? Well, this is revealed later on. For now, the movie is going to lay it on pretty thick.

Kelly confides in her hunky teacher (who sorta looks like Andrew McCarthy) that she keeps having that messed up dream from earlier. But then she got amnesia when she was 12 and couldn't remember anything before then. OH BOY I KINDA SORTA KNOW WHERE THIS IS GOING BOY HOWDY!!

So yeah, I'm shouting the entire movie "THAT'S NOT A DREAM, THAT'S A MEMORY!" but the movie wants to play this game, so we'll play along. *sigh* GOSH what a weird "dream"! You should get hooked up to some machines and have this "DREAM" analyzed! GOD THIS FUCKING DREAM IS SO WEIRD THAT IT COULDN'T POSSIBLY HAPPEN IN REAL LIFE!!!

Oh yeah, the hunky teacher's assistant looks like this: 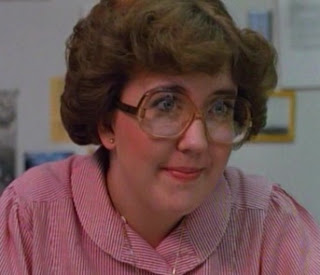 Kelly's mother doesn't approve of Kelly getting this "dream" figured out and reveals that her real last name is something else. The teacher thinks Kelly has multiple personalities but the real thing is much more lamer. In fact, if you can figure it out by now, just say it out loud.

The little stuff in this movie is awesome. Like this one royal douchebag who's in love with Kelly, but she keeps turning him down, so he hooks up with Megan, the head of the sorority, who's a royal bitch in her own right. There's also a chick named Marcia who's a virgin and she's dating this dude named Ralph, who's suppose to be funny. To prove this, they go to some costume party and Ralph decides to dress like a dick.

The movie gets sorta weird at this party, with people just saying weird random things and not really figuring into the whole "killer" angle. But speaking of, it's revealed that Clu Gulager is cheating on Kelly's mom with someone and as he's about to go meet her, our killer kills him. Aww no! I like Clu Gulager! He's a bad ass!

So anyway, it's finally the night of the prank. Kelly's got the keys and she gives them to Megan. Megan tells Kelly and the other girls who are being pranked they have to go into this mall, find the security guard, and steal his uniform. Sounds simple enough. Especially when the security guard looks like this:

It's like this guy said "Y'know, I wanna be a human living '80s cliche!" He even wore cowboy boots! He probably came to work in a Member's Only jacket, blasted some Flock of Seagulls or Dexy's Midnight Runners in his Testarossa. If only he was featured more in this movie. Sadly, he gets killed.

Oh! But before Marcia is killed, she reveals to everybody that she was raped when she was 12 and that's why she's cold about sex, NOT cause she's a virgin. Everyone feels real bad about this, including me, but holy fuck did it take FOREVER to tell us that, when we saw it coming at the words "when I was a kid..."

Ralph takes this as his cue to go ahead and fuck the pain out of Marcia, and it works. Then Ralph gets killed. Man, this chick is gonna have major issues later in life. She's raped as a kid, then her NEXT sexual experience the guy is killed immediately afterwards. She might as well just cut her hair short now and wear plaid. (Lesbian stereotypes FTW!!!) (My apologizes to lesbians everywhere.)

Anyway, it's just Kelly and Marcia left. They hide in a freight elevator thinking the killer won't find them there. But no, he does. Kelly opens the elevator and instead of grabbing onto Marcia like you normally see in horror movies, Kelly fucking leaves Marcia behind as she hauls ass to the door. At some point Kelly goes "Oh yeah Marcia" and turns around but too late: Marcia's dead. Oh well. Sorry lesbians.

Ok so the weird looking assistant to Not Andrew McCarthy figures out what the deal with Kelly is. Hey guess what? It's not a dream, it's a memory. YOU DON'T FUCKING SAY?!?!?!?!?! This really happened when Kelly was a kid. The guy fucking her Mom wasn't Kelly's Dad! Kelly's Dad is the guy who showed up out of nowhere and gets burnt. So yes, Clu Gulager was the other guy and HE ends up cheating on Kelly's Mom.

Oh wait it gets better. Kelly's REAL dad was in that sanitarium from earlier and he escaped. Oh and he's the crazy gardener guy. Oh snap! So Not Andrew McCarthy shows up at Kelly's Mom's house and I love the way he talks to her. It's like he was instructed to tell a mentally challenged chimp to use the phone.

So Not Andrew McCarthy shows up at the mall and spots Kelly. But Kelly is wearing different clothes. And we see her on the roof getting chased by her dad. And Kelly hits her dad with a pipe, causing him to fall off the roof and go crashing down on the ground. But....

SPOILER ALERT Kelly has a twin sister and she's FUCKING CRAAAAAAAAAZY!!!!!! SHE'S the one going around killing everybody cause she's jealous of Kelly's life. That's it. That's all. So now that I'm royally let down, it's time for Kelly to kill her sister she FORGOT she had.

Ok, I swear a soap opera writer wrote this movie.

Despite the lame twist, this movie is alright. It's not really special, but it is good for a few laughs. The last half of the movie in the mall takes FOREVER and you just get mad at everybody for being so stupid. It's on Netflix Instant Watch, I say give it a go. There are FAR worse movies you could subject yourself to. And if you wanna have fun, have a party where you watch this movie and you dress up like the security guard.

And if you do, PLEASE take a picture of yourself doing so and send it to me. My email is off to the right.

(Mainly for the security guard and the fact there were tits galore in this movie. Otherwise I would've gave it a  2.)
-Jason
Posted by Jason Soto at 11:45 AM