1. The Second Screener Poll is over. I dunno what happened this time around but only 6 people voted. Out of that 6, however, I did have a winner. Check out which one:
http://www.invasionofthebmovies.com/screenerwinner.html

2. The Calender for July is now up:
http://www.invasionofthebmovies.com/calender

3. In non-site news, I made a LiveJournal community about favorite Youtube videos. You can check that out here:
http://community.livejournal.com/youtube_vids/

4. I think I need a new mouse. This one keeps giving me trouble and doesn't wanna slide or something.

5. And finally, cue the Go-Go's cause I'm on vacation! Have a wonderful and safe 4th of July everyone!!
-Jason
Posted by Jason Soto at 9:53 PM No comments:

To everyone who voted for the first screeners poll, thank you.

No seriously. Thanks:
Tamara

And don't forget if you haven't already to vote for the second screener poll, which ends this Friday.
Screeners

Enjoy!
-Jason
Posted by Jason Soto at 9:08 PM No comments:

Sorry that I haven't been updating this feature in the past few weeks. I been kinda sorta busy with stuff. But now it's back! Let's take a look, shall we? 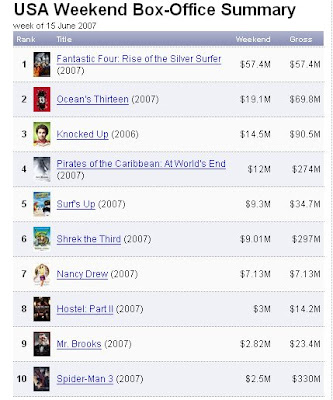 1. So no big surprise for this one, huh? Even though EVERY SINGLE PERSON that I come across says they didn't like the first one and think this one is gonna suck. Go figure.
2. I only saw Ocean's Eleven once. It was "New Years 2005" and me and my friend Bill has been up for like 20 some hours. We watched a shitload of movies beforehand and we put this one on at like 8 AM. I kept falling asleep so I barely remember it. I do know it involved casinos and safes and whatnot. So anyway, I need to watch it again before tackling twelve and then thirteen.
3. I love Knocked Up. I randomly tell people "beard" jokes. (If you saw the movie, that make sense)
4. What's the big deal about these pirate movies? They made like 9 of them at the same time and release them every other year or something. I guess.
5. HEY! It's yet ANOTHER animated penguin movie!! This is like, what, the 20th now?
6. I wanna see Shrek the Third before it slides into movie theater obscurity.
7. So here's my question about Nancy Drew: She was suppose to be some teenage detective solving mysteries, right? And not about trying to fit in? Right? Cause...that's what this movie is about, trying to fit in. Excuse me, where are the dead bodies? I suppose they're gonna try to make The Hardy Boys a fraternaty comedy like Van Wilder.
8. I wanna see Hostel Part 2. No I don't. Yeah..I do. But why? Well...eh fuck it, I'll just wait until it comes out on DVD.
9. Yay, a bio-pic on Mel Brooks!
10. Spider-man 3 still clinging on to the top ten spot. This should show you how much this one sucks. The first two were in the top five spots for like 7 months.

Well, that's it. What's coming out next week?
1408 and Evan Almighty, along with some other movies I've never heard of. I'm gonna guess that Silver Surfer is still gonna be number one, with maybe Evan Almighty in the two or three spot.

Hopefully see you next week!
-Jason
Posted by Jason Soto at 6:12 PM No comments:

Ok everybody, the next round of screeners is posted! Get to votin!

Thanks!
-Jason
Posted by Jason Soto at 9:42 PM No comments:

Screeners Poll Is Over!

So the people have spoken! Well...I guess techically you are the people...so...

The first screener that I will be reviewing is...
Screener Winners

The next poll will be up in a couple of hours! Thanks to everyone who posted, you guys rock!
-Jason
Posted by Jason Soto at 8:07 PM No comments:

I dunno why, I felt the sudden urge to update this review. And maybe add a video to it.

Maybe you can tell me why?
-Jason
Posted by Jason Soto at 12:28 AM No comments:

The Calender also has been updated:
Calender

The Screener Poll ends on Friday. So if you haven't voted for which screener I should review, you should check it out, yo:
Screeners

Thanks!
-Jason
Posted by Jason Soto at 8:22 PM No comments:

I took a look back at one of the first B-Movies I reviewed and added images and updated the review a bit. Check that out here:
Adam and Evil

Also there is a new page on the site! "The Calender" shows what reviews are coming up on what day, along with any other events or review anniversaries. Check that out here:
The Calender

The Calender will probably get updated as I come up with other events and learn people's birthday's. If you want your birthday listed, hit me back and I'll add it.

Thanks!
-Jason
Posted by Jason Soto at 1:56 AM No comments: