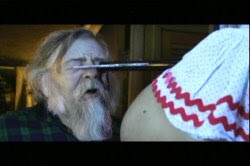 Shivers is back and so am I!!

Another review should be out this week. Gotta make up for lost time ya know.
-Jason
Posted by Jason Soto at 8:16 PM 2 comments:

So as you probably guessed I got shitloads to catch up on but I don't have a lot of time (I do have a job and a new life, sorta) so what I'll need from you guys is:

Tell me anything that you think I need to know that happened in the movie/internet world from August 31st to September 24th. Just the main stuff. This includes movie news and interesting blog posts I should check out.

In the meantime I'll be scanning the LAMB (Sorry, probably gonna have to miss out on this months LAMB Movie of the Month again, but Eurotrip is a pretty funny movie and it would've gotten a great review from me.) and other reputable online sources.

So AT&T said they won't be by my place until the 16th. That's an extra week of no internet and no cable. How am I coping with all this?

Yes, I am at a local library, using Felicia's library card to catch up on the intarwebs. So far it seems like no one misses me, which isn't that hard to believe honestly.

To update I did finally find a job, at Staples. I'll be making copies and business cards n crap. That should be cool. It's not, but it should be.

But...I have no internet. I'm currently at the library checking stuff and stuff. And it appears I won't have internet for...oh...2 weeks.