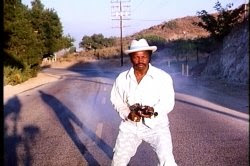 In memory of Rudy Ray Moore, we decide to take on his classic (Using that word loosely here) film "Dolemite"

PS: You all aren't really jive ass honkeys. I was just trying to be funny

Posted by Jason Soto at 5:44 PM No comments:

I Have To Do This

Well, only three people submitted an answer. I'm guessing it's cause this was challenging. On top of that, Wordle kinda messed up by not including certain words. But out of the three that sent answers, we do have a winner. 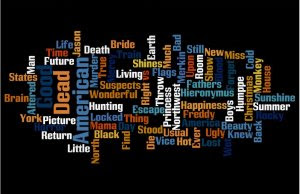 (Click on picture to see it bigger on the site.)

First, the correct answers:
The Lost Boys
Can Hieronymus Merkin Ever Forget Mercy Humppe and Find True Happiness?
North by Northwest
It's A Wonderful Life
American Beauty
Freddy vs Jason
Back to the Future
The Day The Earth Stood Still
House of the Dead
Flags of Our Fathers
Little Miss Sunshine
The Usual Suspects
Good Will Hunting
Once Upon A Time In America
The Princess Bride
Rocky Horror Picture Show
The Man Who Knew Too Much
The Good The Bad And The Ugly
In Cold Blood
Throw Mama From The Train
Monkey Shines
Altered States
Black Christmas
The Return of the Living Dead
Escape From New York
Wet Hot American Summer
Brain That Wouldn't Die
Murder by Death
Your Vice Is A Locked Room
Do The Right Thing

Next time I do something like this, I promise it won't be this hard.

Just a reminder that the jumbled movie title quiz ends on Friday. I won't accept any entries after the 14th, so hurry and get those entries in, even if you don't have all 30 done.

Thanks!
-Jason
Posted by Jason Soto at 10:11 AM No comments: 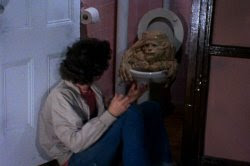 You guys, this is possibly my new favorite bad movie ever in the history of forever!

EDIT TO ADD:
It's been bought to my attention that small words like "by", "the", "and" and whatever else didn't appear in this picture for some reason. I apologize for any confusion. Hopefully everyone will figure out the titles still.

(Click on picture to see it bigger on the site.)

With special thanks to wordle.net I have here 30 movie titles all jumbled up. What you gotta do is try to figure them all out. Here are the rules and whatnot:

1. This will go for a week. Whoever has the most answers by next Friday, November 14th is declared the winner.

2. I'm disabling comments so no one posts any answers on here. Send all entries to invasionofthebmovies at gmail dot com.

3. I didn't include any one worded titles like "Snatch" or "Once". There are no sequels. Well, techically. One movie is part of a series but I dunno if that counts has a sequel or not. You'll see when you get it. The longest title in the quiz is 11 words long. I tried not to be TOO obscure but I think I did on a few to make it slightly challenging.

4. As of right now there's no prize for whoever wins. But if everyone needs some kind of motivation, then I guess I'll think of something. But it won't be anything pricey. Money's kinda tight, what with Christmas coming up and stuff.

I'm guessing no opinions=we want more Five For Fridays! So here ya go! Let's rock it like a hurricane, yo!

1. Oh! OH! OH!! OHHHH!! OH GOD YES!!!-Me and my darling fiancee went to the midnight screening of "Zach and Miri Make a Porno", which was just 18 shades of awesome. It felt like it was some sort of secret thing cause there weren't a lot of people there and thankfully no kids. I'm willing to bet there were kids during the regular showings cause people are retarded. Anyway, I never been to a midnight screening of anything so it was a new experience for me. As for the movie, I thought it was awesome. I could've went without one part (literally) at the end. If you haven't seen it, I won't tell you. I'll let you be surprised like I was. I am mildly miffed at the critics though who said this was like any typical romantic comedy. Um, ok? Whatever. Like I said, people are retarded.

2. You Spin Me Right Round Baby-If you notice over there to the right, you'll see in my DVD watched listing I saw a film called "Hell on Wheels". My fiancee suggested it and asked me nicely to add it to my netflix. It was comfortably nestled betweent "C.H.U.D" and "Basket Case". Anyway, we watched it Wednesday night and it's a documentary about how roller derby made a comeback and the first team of girls to bring it back. It was pretty interesting. It started with a team in Austin and the four girls in charge wanted to turn the whole thing into some corporation and the players were employees, but the "employees" weren't happy with the situation so they said "knock it off or we walk", the "presidents" said no and they indeed walked and started their own, which set a path for the current state of derby where every skater is equal and stuff. It's pretty good. If you were curious about derby, you should look for this and check it out.

3. Coming Up Next On Showtime: Forrest Gump: The Series-How come "Crash" got turned into a TV show on Showtime? What is it about? Yes, I have Showtime and I could just watch it but...I don't want to. I think it's more fun trying to figure out what it's about. I'm gonna assume it's one of those anthology shows that tell different stories each week about a group of racist people who run across each other or something. Cause that's more or less what the movie was about. But I liked the movie, even though a lot of people didn't from what I read. And what role does Dennis Hopper play? Is he the Rod Sterling in this situation? Oh what the hell, I'll check out an episode.

4. Wait, It's NOT A Remake of the George C. Scott Horror Movie?-When I read the plot for the film "Changeling" I was confused. Then I heard it was based on a true story and I got even more confused. Let's take a look at this through the Jason scope, shall we?

A single mom finds that her son went missing in Los Angeles. After a month or so the L.A cops are like "We got him" and they deliever her a kid, but it's not her kid. The cops go "Yes it is, make him your son or we'll lock you up in an asylum!" but no, she says it's not her kid so they do indeed lock her up in an asylum. It turns out it really isn't her kid and the L.A cops were like "Um...we can't find him but instead of looking like idiots, let's grab some RANDOM kid and be like 'Hey lady, this is your kid' and hope SHE DOESN'T NOTICE! High five me, Jesus, I just struck oil!"

No offense to everyone involved, especially since this apparently "happened", but that sounds retarded. If I'm wrong about the story in any way, please let me know.

5. In Tribute-In the few weeks that I haven't done The Five, some people died. Including Rudy Ray Moore and Michael Crichton. I totally dug the Jurassic Park films (yes even parts 2 and 3), even though I'm not a big dinosaur nut like I know some people are. Looking at his credits, I didn't know he wrote "Twister" and "Coma" which are other films I've enjoyed. And I never watched "ER" cause medical dramas that don't feature Howie Mandel in a snowglobe don't do anything for me.
As for Rudy Ray Moore, I plan on paying a tribute to him later this month in the form of a brand spankin' new Mass Invasion! Me and my dear friends will be checking out "Dolemite", so stay tuned for that.

That'll do it. The new game/contest/whatever thingy will be posted a bit later. I doubt I'll have a prize but if no one participates I'll sweeten the deal with a little somethin-somethin.
-Jason
Posted by Jason Soto at 10:12 AM 1 comment:

I have to leave for work in about 15 minutes so I wanna make this quick so people who only read blogs during the day can have a say in this.

1. I'm gonna have a neat little game/contest thing coming up soon. I dunno if I'm gonna have prizes for it or not. Fletch at Blog Cabins does fun stuff for no prizes and people respond well to them, so I could give it a shot I suppose. Stay tuned for that.

2. I plan on doing a Five For Friday tomorrow but what I wanna know is this.
A-Do you guys like that feature?
B-If so, do you think there's anything different I can do?
C-If not, why and what should I do to improve on it?

Today is possibly the last beautiful day (as in temps over 75, which is weird for November 6th in Indiana). REM, what do you have to say about that?

-Jason
Posted by Jason Soto at 2:43 PM No comments:

Mr. Fletch over at Blog Cabins started another interesting meme thingy and this time I got tagged. Yay! This time around, we have to list a movie we like for every letter in the alphabet. Read his post for all the super long and mildly confusing (to me anyway) rules.

I'm suppose to tag five people but Fletch got all the people I read on a regular basis. The only one he didn't get was Final Girl and the odds of her reading my blog, then posting about this meme are slim, so...yeah. But I look forward to reading everyone elses list.
-Jason
Posted by Jason Soto at 11:03 PM 2 comments: 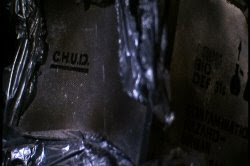 Yay, new review time! Here's a game: try to come up with as many variations of what C.H.U.D could stand for.

Cupid Hates Unitarian Dogs!
-Jason
Posted by Jason Soto at 9:22 AM No comments: