Since I created the site in 2005, I tried to celebrate Halloween in various way. The first year I spent three days watching 15 movies, which took a lot out of me. The second year, I posted my old "Friday Night Video Reviews" reviews on the awful "Halloween" sequels. So now it's 2007.

And I got nothing. I'm sorry to say. But I been pretty busy with stuff. Which I'll tell you some of what that is.

First, I'm helping my friend Bill Szany with a short film he made for a Youtube contest. I dunno if I can go much more into it. Well, on the other hand, I did make a preview for it, which you can see here.

Then there's other video projects, plus my own short film I'm gonna be making later this year, and the return of BMC5K! If you know what that is, hooray! If not, just wait. You'll know.

So with all of that going on, I didn't really have time to go rent some bad scary movies, or anything. I think I was gonna tackle one of the Friday the 13th movies, I think starting with Part 3, when they did the 3-D thing. But I'll save that for another time.

I did read a thing in the "AV Club" by my on-again favorite/off-again favorite director Eli Roth (I can't stand Cabin Fever, Hostel was alright, didn't see Hostel 2, and the "Thanksgiving" Promo during "Grindhouse" was fuckin' awesome) where he talks about doing a 24-hour horror movie marathon, which I was tempted to do, if I read about it early enough and had time to get the movies. You can check that out here.

And before we go, I do wanna say I have an announcement coming either tomorrow night or Thursday night, depending on when I'm able to post it. So stay tuned for that.

In the meantime, I did make something relating to horror movies. Please check out:
"Soto Meets Jigsaw"

Enjoy!
-Jason
Posted by Jason Soto at 7:34 PM No comments: 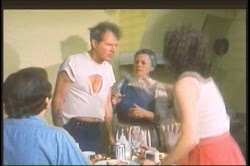 Apparently some dude named Don Dohler made this, since his name appears in this movie roughly 200 million times.

And this review was sponsored in part by...oh you'll see.

Enjoy!
-Jason
Posted by Jason Soto at 8:54 PM No comments:

So Jason, why don't you hardly write in your blog anymore?
I dunno, really. Maybe I should write more stuff. I think the problem for me is I write the articles or whatever and I tell everyone in the known universe and I hardly get any feedback. Granted, I've gotten some comments here or there and I do appreciate them (And sorry to those of you who HAD to create an account to leave a comment. I changed that since then.), it's just it feels like I'm writing stuff to deaf ears...or deaf eyes....or...whatever.

But maybe none of that should matter. I should just keep pluggin' away and writing whatever and be content on the few people who do read this regularly and be happy. So I will try to think of things to write about in here in the future.

What's up with the "Movie Show"?
Originally, I was gonna just stop for a week, which turned into two weeks, then before I knew it, a whole month has gone by. Then I was planning the newest one and realized how much alike all the episodes are and maybe a bit variety would spice things up. And maybe present the Top Ten Movies a little better. Maybe give out some movie news? I tried to do viewer email but...I think we all can figure out what happened with that. But I'm gonna revamp it and present a new episode sometime next week, in time for Halloween, possibly. If not, oh well.

I'm sick of you complaining all the damn time. Are you turning emo?
Yes. I'm letting my hair grow out so I can cover my eyes. I already own lots of black clothing and I occasionally paint my fingernails black. I just need to start drinking coffee and cry a lot.

See any good movies recently?
Yes, which I was gonna cover in the movie show but I can mention them here. A few weeks back I saw "Shoot 'Em Up", the crazy action flick starring Clive Owen. I thought it was pretty good and enjoyable and it didn't take itself seriously, which is always great. I would recommend it but unfortunately not a lot of people "got" it and it was pulled from theaters three weeks after it's release date, meanwhile "Transformers" is still playing in theaters all over the place.

I also saw "The Darjeeling Limited" this past weekend, which is only being shown in selected theaters for some reason. I never seen a Wes Anderson movie before and I was pretty interested in seeing this one. Luckily, I was in Indianapolis this past weekend and they have an "art cinema" where they play artsy movies and Darjeeling was playing there. I gotta say I liked it and thought it was funny and sad. It was also filmed beautifully and it makes me wanna check out his other works now.

One final question, if you decide to stop doing the Movie Show, do you plan on still listing the top movies?
Yes, I'd like to. Cause I think it's interesting and it's one thing that no one else has done (I don't think).

Thanks for reading. Check out the sites listed to the right for other things I'm doine and I will post more stuff in here. I promise.
-Jason
Posted by Jason Soto at 2:34 AM No comments: 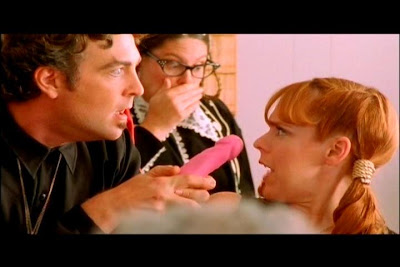 I was gonna make this a regular movie review but after watching the movie, I realized it doesn't warrent a full-on review, so I made it a probe instead.

Enjoy the morality tale of four actors who wish to be Jesus, winding up in a super religious town. And zombies appear at the end.
Gory Gory Hallelujah

And Happy Birthday wishes go to Rachael, who you may know as one of the many people that helps outs during the "Mass Invasions".

New (Late) Calendar; Where The Hell Have I Been?

The calendar for October is put up. Sorry it's late. And I didn't put any upcoming reviews on it cause I never do em the day that I say I am anyway. I would do one today but here in Indiana it's all hot and I just spent 2 and a half hours cutting grass/picking up leaves and it's sort of impaired my humorous writing (no, this doesn't explain the other times my writing has been impaired). Anyway, I will get to a couple of things this week, including a "Date My Mom" episode and an updated review. I'm sorta planning on what to do on the site for Halloween, plus figure out what the next Christmas themed "Mass Invasion" is gonna be.

Anyway, here's the link to the calendar:

And we have a birthday this month!! If you want your birthday added to the calendar, let me know and I'll add it.