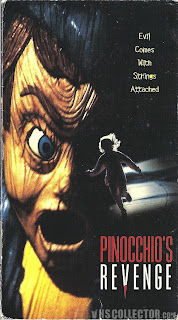 I know people aren't going to believe me when I say this but, quite seriously, "Pinocchio's Revenge" is one fucking creepy ass movie. And it's pretty well made. I know, I'm as shocked as you are. I was expecting a horrible corny "Child's Play" rip off, and in all rights it kinda is. But it's like "Child's Play" meets, I dunno, "Silence of the Lambs" or something.

The movie starts "Five years ago" (So 2007) and a cop is just driving along when a parked car just suddenly jumps out of nowhere, scaring him. The cop runs the plates and finds it belongs to a guy named Vincent Gotto. Vincent is in the middle of burying a child's body in the woods. The cop stumbles upon this and stops him. The investigators find not only that the dead kid was Gotto's son, but next to the buried body was a 3-foot tall Pinocchio puppet.

Now it's present day and 2012 looks a lot like the early '90s. Jennifer is Gotto's public defender and has to prove that he didn't kill his kid, along with a bunch of other dead kids. Gotto says he did the crimes but Jennifer thinks he's protecting somebody. Since she's a lawyer and all that crap, she has to look at the evidence, which includes the puppet.

Jennifer has a daughter named Zoe, who is either 2-years-old or a 8-year-old with the annoying fucking voice of a 2-year-old. The scene with Zoe and her classmates is weird cause it plays out like a teen drama but it's, you know, little kids. There's even a cat fight, which is disturbing on so many levels that I won't spend any more time on it. Let's just say Zoe is a bit troubled.

It's also Zoe's birthday and the puppet finds its way in Jennifer's car and Jennifer's boyfriend Dave finds it, thinking it's a present for Zoe. Zoe ends up liking the puppet, even wanting to sleep with it. (There's a whole weird part where Zoe talks about sleeping with things with rather human names but again I don't wanna devote too much time to it.)

So what's bugging Zoe? Her dad left her. That's pretty much it. She isn't taking it too well and is seeing a doctor, who just talks to her about stuff. The beginning's a bit slow, I'll admit. But soon, Zoe starts talking to the puppet and one day when she takes Pinocchio to school, the bitchy girl she got into a fight with earlier takes him and throws him over a fence. And as a result of this, the bitchy girl is then hit by a bus. It was kind of a funny scene really.

During the entire movie, you don't see Pinocchio really doing anything but sitting there, so then you ask yourself "Is he really alive or is this in Zoe's head?" Things take a turn for the HOLY SHIT THIS IS MOTHERFUCKING CREEPY AS FUCK when we see Pinocchio TALK! It's just....ugh.

Pinocchio seems to think if Dave was "out of the way" Jennifer would spend more time with Zoe, but Zoe doesn't want to hurt Dave. Oh well, Pinocchio shoves Dave down the basement stairs.

Ok, I'm gonna backtrack for a moment. This movie does have it's flaws. So Dave is babysitting Zoe and he watched her take Pinocchio to bed with her. About an hour later, after Zoe had the conversation with the puppet about killing Dave, she leaves the room to stop Pinocchio, who scampered off into the basement. Zoe tells Dave she's going after him, but Dave stops her saying he'll get him. Dude...you saw Zoe take the puppet into the bedroom, how about asking HOW he ended up in the basement?

Whatever, he gets pushed and ends up in the hospital.

Zoe takes Pinocchio with her to the therapist's office and when the therapist leaves the room for a moment, she has another conversation with Pinocchio. The therapist tapes all his sessions though and shows Jennifer the tape and we see Zoe talking only to herself. OOOH!!!

Anyway, this movie really shouldn't have been as good as it was. It's not GREAT by any stretch, but it wasn't what I was expecting. The acting was good, the writing was pretty solid, and fucking Pinocchio was creepy as fuck. So what happened? Is it all in Zoe's head?

We really don't get an answer. Jennifer gets fed up, takes Pinocchio and locks him in her trunk. But soon, the live-in maid ends up killed and Jennifer gets hit on the head. Then she sees Pinocchio running around, trying to kill her. When Jennifer tries to fight him off, we see it was really Zoe she was fighting off!

So now Zoe is in a mental hospital, Jennifer swears it was Pinocchio and the movie just ends. Uh, how about look in the "tunk"? If it's in there, it's Zoe. If not, it's alive! And before you ask, we don't get any indication that Pinocchio was possessed by Vincent or anything evil. There isn't much of an explanation besides "Maybe it was Zoe."

I say check it out. You probably think I'm crazy but as a guy who uses inanimate objects in my own videos and other people's videos I tend to get creeped out by shit like this. The main stuffed animal that I use, Cokie is...oh he's in Texas right now. OH SHIT NICK RUN!!!!

Haha... nice. You know, it does seem like I'm being watched sometimes... :P

I have no idea who left that comment up above but I'm HOPING it's a joke.
-Jason