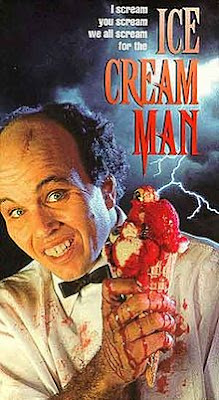 Ever since I seen this movie, I wanted to present it to the world. I did what's probably the geekiest thing ever by doing my own version of "Mystery Science Theater 3000" and sold copies of that. I wanted to do "Ice Cream Man" on my version but never got around to it. Then I created Invasion of the B Movies and always had this movie in the back of my head to review some day. Now that we're in the home stretch of me closing up the site, I figured it was about time I got around to it.

And boy...is this movie a doozy.

First off, let's talk about the cast! It features the following people and I'm not making any of this up:
Clint Howard
David Naughton
Olivia Hussey
Jan Michael Vincent
Lee Majors 2 cause they needed a sequel apparently
David Warner
And motherfucking Doug Llewelyn!! I'm not fucking joking!

Anyway, the film starts in the '50s before color was invented (cause the scene is in black and white) and an ice cream man is making a stop outside a house when some laughable stereotypical gangsters show up and shoot him down. It's never explained why this happened so don't look at me for the answer. Anyway, a kid shows up, kinda unfazed by this and simply asks "Who's gonna deliver the ice cream now?"

Flash forward to, I guess, present day and that kid grew up to be Clint Howard. Clint, playing Gregory, is clearly not right in the head. He freaks out all the kids in line waiting for ice cream, and there's rats and roaches crawling around all over the ice cream. Eh, it's nothing I haven't seen before from working at McDonald's for ten years.

We meet our main group of kids cause you know this movie is gonna focus on a main group of kids. There's Johnny the typical bland kid with the bland name, Heather the only girl in the group, Tuna the "fat" kid, and Small Paul, a small kid.

I wanna talk about Tuna for a minute. The kid they hired to play him was clearly not fat but his character needed to be fat for a number of reasons that really didn't amount to anything out of some lame fat jokes. So their solution was to have the kid wear OBVIOUS PADDING UNDER HIS CLOTHES! But didn't do anything to his face, arms, or legs. Cause only fat people get fat in the stomach. Right...

Anyway, Johnny is left alone in the park and Gregory shows up, acting creepy towards Johnny. Next thing you know, it's discovered he's gone missing! LE GASP! And inside Gregory's freezer is blood! AND AN EYEBALL! Oh and Gregory puts an eyeball in one of the cops ice cream and the cop doesn't seem to notice! Eww!

Anyway, turns out Johnny isn't really dead. He just saw Gregory killing a random dude at the park and he got scared and hid out for 24 hours. Meanwhile we dive into the life of the other kids. David Warner is a priest who does weird hypnotism to Heather's mom (Never explained). David Naughton is Tuna's dad who is cheating on Tuna's mom with the town slut. I sense a bad moon rising here, let me tell you. Jan Michael Vincent and Lee Majors 2: Lee Majors Harder are the cops and Olivia Hussey is Gregory's crazy nurse. And despite this, she's still hot! Explain that!

So because this movie is told from the kids point of view, the kids know that Gregory is a crazy killer but none of the adults either notice or believe them. There's a hilarious scene where Tuna is running from Gregory in a grocery store, so he simply hides underneath tables and one point he hides underneath a cart. That would be fine if the cart was covered but it was open and EVERYBODY COULD SEE HIM UNDERNEATH THE CART! Including the lady pushing the cart! Why she didn't just stop and say "Uh...what are you doing fake fat kid?"

Anyway, the cops eventually believe Tuna because the script calls for it and they immediately get a warrant and go searching...his warehouse where he makes the ice cream! And this was a funny scene was it was literally just cops running around, knocking things over for no real reason and then shrugging their shoulders going "Eh, nothing here. Let's go!"

But Gregory apparently seen "Bad Ronald" and knows how to hide kids! Cause he has kidnapped Paul Wall!! 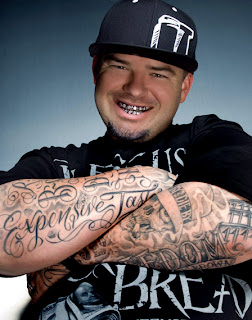 Er no. Small Paul. Apparently because Small Paul reminds Gregory of himself as a kid. Uh oh!

With Small Paul missing, the rest of the kids, who call themselves Rocketeers, decide to do something about this and rescue him! This involves following him and taking pictures of all the blood inside his truck. THE TRUCK! Why didn't cops check inside the truck?! Whatever.

Apparently the camera they used to take the pictures belongs to Johnny's older brother, who took some sex photos of him and his big nosed girlfriend. Nothing ever came of either sets of pictures. Then we get the weirdest scene and for this movie that's saying something.

The two cops decide to check out Gregory's past and find out he use to stay at an asylum called Wishing Well. The cops go there and try to talk to the doctor but he's distracted by a patient...then it's revealed that the doctor is really a patient...and all the crazy people have killed all the doctors! So the cops slowly, and I do mean slowly, walk out of the building. There wasn't even the feeling of them being threatened, they just kinda roamed around and at one point separated for some reason, then escaped. Alrighty then. 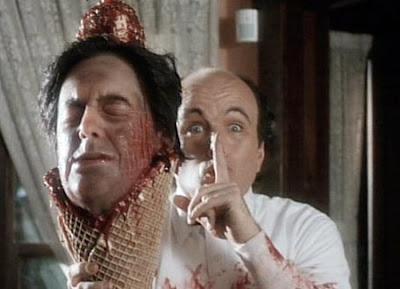 I love this movie. As much crap as it gives to me, I love it. I guess this is like an abusive relationship. BUT I LOVE IT SO MUCH NO MATTER HOW MUCH IT BEATS ME!!!

The kids have had enough and decide it's time to fight back! Gregory accepts this challenge and manages to grab Tuna while riding his bike and lock him in a freezer. Johnny and Heather follow him back to the warehouse where they are chased by Gregory. Eventually, Small Paul has had enough of playing Bad Ronald and remembers something in saw in a "Friday the 13th" film and uses a picture of the old dead Ice Cream Guy from the '50s to lure Gregory away from the kids and into a giant mixer, where he's chopped up into a million pieces. Yum.

Later, when it's fall, Tuna lost weight (AKA the kid took off the padding) and reveals that Paul is now in therapy, where surely he's gonna be the NEXT Ice Cream Man!! MUHAHAHAHAHAHA!!!!!!

This movie sounds terrible and yes it is fucking terrible but it's oh so much fun at the same time. It's fun to see Clint Howard in a lead role, even if it's a creepy serial killer with a gravelly voice. All the random B-Z list celebrities in this movie is a hoot, and it's just some good dumb fun. And it's pretty safe for kids, honestly. There's SOME blood but if you know kids who are into gory shit, this is probably the film for him. And you ALMOST see boobies so there ya go. Perfect movie for kids.

You ever seen the OTHER 1990s killer ice cream man movie, Mr. Ice Cream Man? I'd love a comparison.

harada57 said...
This comment has been removed by a blog administrator.
5:37 AM

Unknown said...
This comment has been removed by a blog administrator.
5:45 AM