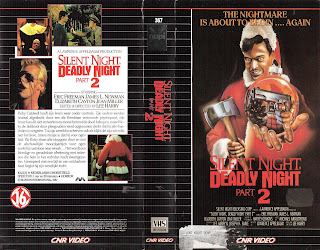 So this right here is my 900th post. I knew I had to make it something special so why not devote it to the most AWESOME Christmas movie I've ever seen. Why this movie isn't played for 24 hours on a loop on some channel I'll never know. In fact...I KNOW WHAT I'M DOING THIS CHRISTMAS!!!!!!

This is probably going to more about talking about the movie than reviewing it. This movie does hold a special place in my heart. I've talking about it non-stop. I've shown it to friends. So it's time I dive into the history of this movie. While talking about it.

First off, if you haven't seen the first movie, DO NOT WORRY! The people behind SNDN2 (as the kids say) got you covered. The first 45 minutes flashback to all the events of the first movie. The flashback is being presented by Ricky, the younger brother of Billy from the first movie. Don't think too much about how he knows all this stuff despite being only a baby AND not being there. Maybe he read a lot of newspaper articles and police reports.

The first time I seen this movie, it was like 1998 or 1999. My friend Bill had a shit ton of movies he and his Mom got from a video store that was closing and this was one of them. I guess he watched it before showing it to me cause he was super excited to have me watch it. And as we were watching it, I said "yes, this is a mighty fine film." And I was grateful for all the unneeded flashback stuff.

Anyway, after the flashback of the first movie, we focus on Ricky and his problems. His story is he was sent to many foster homes trying to adjust cause he kept having problems with nuns and the color red. Hmm...I wonder why?

Here's the thing about this movie. The first movie was about Billy and his problems of Santa Claus raping his mother and killing his parents and feeling the need to punish bad people, no matter what your definition of "bad" is. But here, Ricky actually kills people that kinda deserved it. Like his first kill was in a field somewhere and a couple is out having a picnic. Soon, the guy starts getting fresh with the girl and tries to rape her. She manages to stop him in time. Realizing he's not getting any, the guy walks away. And Ricky runs him over with a car.

Then there's the scene where Ricky kills some mafia goon guy who looks like Al Bundy in an alley. I was kinda rootin' for Ricky. I should mention that Ricky is played by Eric Freeman. Everyone here knows how ape shit I went over him but honestly, he's the best actor in the world.

When me and Bill watched it, we kept quoting all his lines non-stop. He just has a way of saying shit. Such simple things like "I had to GET a JOB!!!" and "RED CAR! GOOD POINT!" You need to see it to get it. And I'll be happy to show it to you.

Eventually, Ricky falls in love with a girl named Jennifer and he's happy for a long time. He still has a temper, like in a hilarious scene in a movie theater where Ricky kills some loud mouth asshole who keeps talking through the movie. Oh and get this. The movie they're seeing? Is about a guy who dresses up as Santa and kills everybody.

I've lost count how many times I've seen this movie. Every time I watch it, I see something different in it. It's why I'm kinda bummed the DVD is not easy to find. But my friend Bill gave me the VHS copy he got and I'm proud to have it. Ah, hard to find movies on VHS.

Jennifer's ex-boyfriend, who looks like David Bowie at odd angles, shows up to bug her. Ricky isn't too happy to see him so he kills him. And this kicks off the most hilarious killing spree ever. You've probably seen one part of it but here, in it's entire glory, is the ENTIRE killing spree.

God, I love that. I was surprised, when I discovered the internet, the whole GARBAGE DAY! thing became a popular meme. Sometimes, I love the internet.

So this is why Ricky is now in jail. He kills his doctor/shrink/lawyer whoever he was talking to and simply walks out of jail. Alrighty. He decides to hunt down Mother Superior, who caused him and his brother so much trouble growing up. And Mother Superior must've had a stroke OVER a fryer cause her ENTIRE face is like melted off. Anyway, Ricky shows up dressed as Santa (of course, it's a sequel to a guy-dressed-as-Santa-killing-people movie) and, well, kills Mother Superior. Yay!!

There's an ambiguous ending whether or not Ricky is killed by the cops. Judging from what I heard about parts 3-5, it doesn't really matter. Maybe one day...

Obviously, the best part about this movie is Eric Freeman. If you watched that clip up above, you'll see why. His acting, his eyebrows, his voice. Needs to be seen to be believed. And if you're still not convinced, come over to my house and I'll make you watch this movie.

I have watched ANY of these movies and they aren't on Netflix instant right now, so I will have to wait awhile to see what all the hub-bub is about. Sounds fun, tho!