I remember when I first made this blog. It was just some form of outlet to have a place for people to discuss my reviews and maybe do a few posts here and there about movies in general, good or bad. Now, 200 posts later, thanks to the LAMB, I'm having a whole bunch of awesome people read my blog and I thank each and every one of you.

Speaking of the LAMB, I check it everyday to see who's new and what's going on and stuff and there are a few people who came up with clever blog names.

Like for example, one I like is: He Shot Cyrus, only cause I recently watched The Warriors and anytime I read the name, I can hear David Patrick Kelly (impressed?) scream out in his raspy voice "HE SHOT CYRUS! THE WARRIOR!"

Another one is Careful With That Blog, Eugene, only cause it cracks me up. I don't know what it all means but it's clever and funny. Plus I know a guy name Eugene, so that makes it 10 million times better.

On top of them having cool names, they reall are cool blogs, you should check 'em out.

So those cool names got me wondering what I would've named my blog if I didn't make it related to the site, or even have a site and just blogged. Most likely it would be a movie quote and probably from "Pulp Fiction".

1. MMM...This Is A Tasty Burger: The URL would have to be tastyburger.blogspot.com and I would try to get a pic of Samuel L. Jackson eatin the burger for my heading.
2. Ezekial 25:17: Downside to this is a bunch of religious people would find me, thinking it was a religious site, so I'd have to put the words motherfucker after it or something.
3. Since we're swearing in the title, Bad Motherfucker. I should just create a blog called Bad Motherfucker anyway cause it's a great title. I dunno what it'd be about but I can't pass up on an opportunity on that.

I think I'll stop there. I can't top Bad Motherfucker.

This wasn't planned but to celebrate the 200th post, here is the Mass Invasion review of "Showgirls" that's been in the works for over a month now: 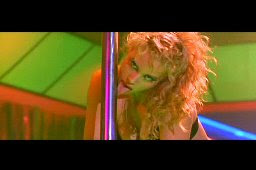 Well, thank you to everyone who reads and comments on my posts, especially comments. Here's to another 200 posts!
-Jason
Posted by Jason Soto at 11:06 AM

Thanks a lot for the support! I'll add you blog to my blogroll.