This review is for two things: a compare and contrast of both versions of "The Wicker Man" and an entry in the Final Girl Film Club. I'm seperating the reviews of both versions cause I wasn't sure if it'd count if both versions were in one review. Probably for the best cause I could write a novel on how bad the remake is. But let's not get ahead of ourselves here.

"The Wicker Man (1973)" starts off with Sergeant Howie (Edward Woodward) arriving on the island of Summerisle. He's there to find a missing girl named Rowan. Who contacted him and why remains a mystery but is explained by the time the movie ends. As soon as Howie arrives, things get kinda strange. He shows a group of old guys a picture of Rowan and they all claim they don't know her. 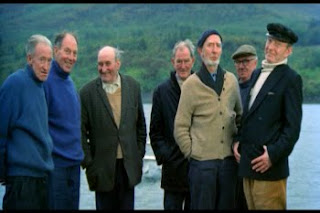 Since this movie was made in the 70's, this movie falls victim to having a folk song attached to the opening credits. (Play that song while reading the rest of this review. The video is just a song, no video so you won't be missing anything.) It never fails to crack me up with movies did this. I should come up with a movie, called "70's Movie" or something and bring this back. Then again, it wouldn't be a folk song but some crap put out by Miley Cyrus or Justin Bubble or whatever his name is. Fuck I'm getting old.

Anyway, Howie makes his way through the island and comes upon a pub with a hotel attached. He asks for a room and the first half of this movie turns into a musical cause every other scene has people singing. There's a rather lengthy song about "The Landlord's Daughter", in this case Willow, and the Landlord is a Paul Lynde-type. I'm sure if Paul Lynde was still alive, he would've been asked to be in the Nic Cage remake. And that would've saved the movie, I'm sure.

After Willow shows Howie his room, he goes out for a nightly stroll and comes upon a bunch of people fucking outside. And a naked chick crying on a grave. Howie goes back to his room and prays. This is important because this reveals that Howie is a super Christian, who not only goes to Church, but he participates by reading prayers and stuff. 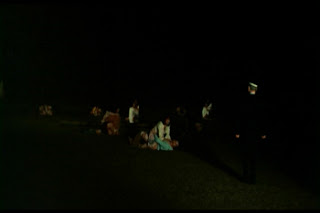 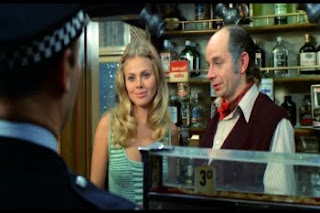 So what I mean by the title of this post is if any uptight Christian were to watch this, they would find this to be a horror movie since everyone on this island is a pagan. What with them roaming around naked, fucking outdoors, and something else that happens at the end of the movie. 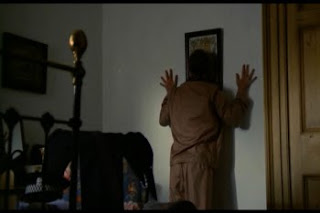 The movie amps up the weirdness when Willow goes to her room, gets naked, and sings some seduction song. She dances, shakes her ass, and basically taps on the wall. Howie is tempted but he just settles for humping the wall. Once his load is blown in his pants, he goes to sleep.

Turns out that Howie is a virgin and is waiting until he's married. Willow is dissapointed but shrugs it off. The search for Rowan continues.

Howie checks out the school and is apalled to hear the teacher say the word "penis". I know, how dare she??!? The teacher and the students say they don't know who Rowan is and showing that Edward Woodward is a better actor than Nic Cage, knows how to take the teachers grade book without coming off as a complete jerk. There, he finds Rowan's name and calls a bunch of little girls liars. Good job Mr. Christian.

Howie roams around some more and some more weird images show up. He learns that Rowan did exist at some point but now she's dead and there's a grave for her. He also learns that there's no "old religion" on the island, which techically isn't true if you really think about it. Cause before God and stuff, people danced around fires naked and worshipped the sun and whatever. Then the Pope came in with his shotgun and said "DO THIS SHIT!! NOW!!!" At least that's the version I was taught. 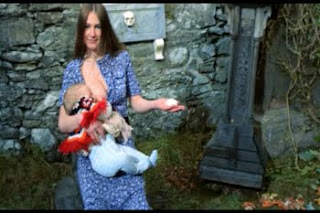 Anyway, things get weirder and weirder and Howie gets more and more disturbed. He finally visits Lord Summerisle, played by Christopher Lee. I was waiting for him to show up cause I like him. But here, he's wearing some awful wig. I'm sure he hasn't had hair like that since, oh, 1930. (How old is Christopher Lee again?) 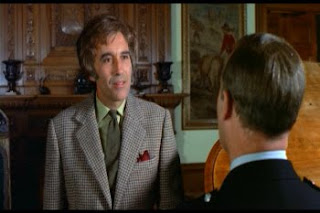 Summerisle tells Howie that his grandfather came to this island a long ass time ago and developed a way to raise fruit. He rejected all the "old" reglious ways and came up with his own or something to bring in the harvest. There was also something about a particular kind of fruit but the movie kinda lost me at this point. Anyway, Summerisle gives Howie permission to dig up Rowan's grave.

Of course, they do at night and inside the casket is a dead rabbit, er sorry "hare". Howie storms back to Summerisle's castle and throws the hare's body at him and says "FUCK YOU, I'M OUT!"

The next morning, Howie finds he can't leave cause someone tampered with his plane. I would've figured that out, it seems like something is up with every one of these fuckin' people. Of course no one knows anything and Howie is pretty much stuck on this island. Howie flips out and searches the entire island for Rowan. While that's happening, the island is preparing for their Mayday festival.

This festival calls for everyone to wear animal masks and certain people to dress a certain way. Summerisle himself dresses up as a woman. Wish I was making that up. Oddly enough, Howie doesn't punch a woman, threaten another one with a gun, or dress up as a bear. Now I don't know which version is weirder, this one or the Nic Cage one.

Speaking of guns, I wonder why Howie, as a policeman, doesn't have one. It was never said he doesn't believe in them. You'd think he'd have one. I think it would've came in handy. Of course, Nic Cage had one in the remake...

Anyway, Howie realizes Rowan isn't dead and the only way to get her is to pretend to be Paul Lynde and partake in the pagan ritual, if only for a little bit. He knocks out the Innkeeper and takes his costume, which is suppose to be a Fool. The entire island than dances down to this fake Stonehedge thing they got set up and soon they bring out Rowan.

Howie stupidly blows his cover and just runs up to rescue her. At first I thought the girl playing Rowan was a bad actress cause she was more or less like "PHEW! Thank god YOU saved me, Mr. Policeman I Never Seen Before! Boy Howdy" all flat like. Then she makes him go through this cave and they come out some end on top of a cliff where Summerisle and the rest of the island is waiting. Rowan turns to Howie and goes "FAKE!! You got served, bitch!!" and runs to Summerisle.

In a total "M. Night" twist, it turns out Summerisle tricked Howie into coming to the island on his own free will so they can sacrifice HIM since their harvest is pretty shitty and they think killing him will bring back their god damn apples. It's revealed that everything that happened was somehow planned, from Rowan's mom sending Howie the letter explaining that Rowan is missing to everyone fucking around with him, to planting the grave to, well, just everything. And Howie doesn't even try to fight the people off. He tries to run and one guy grabs him and Howie is like "Oh darn".

Well, he does try to talk himself out of it, by trying to convince the people what they're doing is wrong. But there's no changing these people minds. They strip him nude, paint his body, and put a white robe on him. Then they take him to....THE WICKER MAN!!

They lock him inside and, well, you've all seeing images of Burning Man. Guess how the movie ends? Yep. Kind of a bummer, huh? 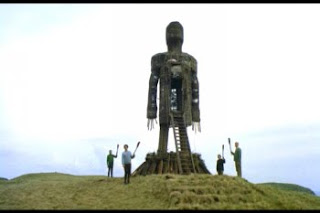 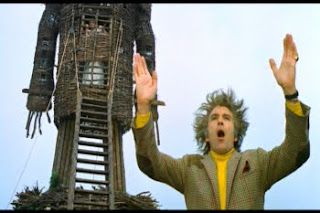 Honestly, I never heard of this movie until the Nic Cage version was released and people were bitching about "remaking a classic!! OMGZ!!!!" and I'll admit it's not bad, but holy fuck it's weird. I guess that's why people like it cause it's weird. And I can agree with them, that it didn't need to be remade, especially how the remake turned out. If you're just dying to know what happens in the remake and how these movies differ, just wait, cause that review will be coming shortly.

As for this one, it was good. Not really scary, unless you are a die hard Christian, then you'll be pissing your pants at all the pagantry going on. I heard even Glenn Beck cried.

"(How old is Christopher Lee again?)"

I think he's pushing 90. And could still kick my ass.