At first I was afraid, I was petrified. Kept thinkin' I'd never have to see this movie ever again. I spent too many nights thinkin' how it was so bad. But I grew strong... I knew I had to carry on.

But now it's back!! From outer space!! I just walked in to find it here with that dumb look on it's face! I should've changed that fuckin' lock, I should've made it leave it's key if I'd had known for just one second you'd be back to bother me!!!!!

And yes, somehow I survived. Yes I survived. I watched the 2006 Nicolas Cage acted Neil LaBute (huh huh butt) directed "The Wicker Man", possibly the most unneeded remake since Gus Van Sant's "Psycho". The differences between these two movies are as huge as semi's.

Speaking of, we start the movie with Nic Cage as a traffic cop, cruising the mean streets of Montana or something. A car is driving and a little girl throws out a doll. Nic scoops it up and then turns on his lights. He then gives the driver a ticket for littering.

He gives the girl her doll back but she throws it out again. While retrieving it again, a semi rams into the car, and since this is a movie the car immedately explodes. Well, ok then.

Flashforward to...some time later. Nic is on personal leave cause the entire thing fucked him up. He recieves a letter from a chick he use to date named Willow. Apparently her daughter has gone missing and she needs his help to find her. Ah, so they got rid of one character from the original and paired the missing girl with Willow. This tugs at Nic's heart strings and can't resist, even though he doesn't know where this Summerisle is.

For the record, this Summerisle is off of Washington State. In the original movie, it was off of Scotland. I guess Nic Cage can't pull off a Scottish accent. So after some searching, and us learning that his first name is Edward (wait, it gets stupider), Nic flies off to Summerisle.

He arrives with the help of some dude who routinely flies to the island. He says he brings supplies to the island but it looks like they do alright for themselves there. Edward is immedately snubbed by the locals, and this time it's all women doing the snubbing. After guessing there's a shark of all fuckin' things inside a sack they have, he's off to find Willow.

Edward arrives at the bar/hotel of Large Woman from "Mr. Deeds", Sister Beech. Willow arrives and shows Edward his room, after awkwardly killing a bee. Important later. Believe it or not. Willow tells Edward she's worried about her daughter Rowan (they kept that first name) but Willow and Rowan's last name is Woodward. Yes, one character's name is Edward and another last name Woodward. They might as well have had Nic Cage pick up the DVD release of the original at some point in this movie. Ugh.

Anyway, Nic starts his search for the girl which consists of roaming around the woods and having horrible conversations with Willow. I say horrible cause the chick playing her can not act at all. She starts a line and just decides to trail off. Here's an example:

Christ this movie. I don't even wanna watch this anymore. Oh, right, I should talk about some more changes to the movie.

You know how Summerisle was played by Christopher Lee in the original? Well in this movie, Summerisle is played by Ellen Brysten. And instead of it being some random pagantry, it's a FEMALE PAGAN FEST. And instead of fruit, it's honey, hence all the bee's. Too bad Edward there is allergic to bee's. He gets stung a few times and "good old fashion medicine" saves him. It's not explained what that is exactly. Probably eels and goat urine.

Basically Edward acts like a dick to everyone, from Leelee Sobieski to a school teacher. The only scene that was remotely CLOSE to the original (besides the ending, even that was different) was the schoolhouse scene. The only difference was Nic Cage acting like a brat and pulling away from the schoolteacher's planner.

Edward discovers that despite everyone saying Rowan doesn't exist, he finds evidence that she did. A picture in the bar is missing. He talks to the photographer and she isn't helpful. He breaks in and finds it and yes the missing picture had Rowan in it, and the crops did fail that year the picture was taken.

In a TWIST! Willow tells Edward that Rowan is his daughter so now it's personal! The scene where he's stung by bees, he wakes up in Sister Summerisle's house and he meets Summerisle. She doesn't really explain shit and Edward leaves. He finds the plane he rode in on and finds the radio is missing and later the pilot is dead.

The final 20 minutes of this movie is just pure comedic gold. I'll save those scenes for the end cause Youtube is crawling with these scenes.

So the final minutes as Edward finding Rowan and trying to save her. Of course this is a trap and much like the original, this all was planned to get him there so they can sacrifice him. But here's the stupidest fucking thing I ever heard: they been planning this FOR YEARS!!!

See, they sent Willow to find a guy, make him fall in love with her, then she'd leave. Then they sent a woman and a girl to get "killed" when a semi hits them. This somehow motivates him to wanna help Willow when "she" sends the letter. THE FUCK??? Oh and the girl and woman that got "killed", are still alive. OH! And some female cop that Edward knew...a plant from Summerisle.

NOW HOLD THE FUCKIN' PHONE!! How are you gonna get someone to pretend to be a cop in this town Edward is from? Everybody knows everyone and she was actually wearing a cop uniform AND was walking around the police station. Unless she blew a lot of guys and said "Hey pretend I work here", this is just fuckin' stupid. And why him?? Even he asks this but it's not answered. I guess killing him will bring back their god damn honey.

Anyway, not only do they put him in the giant Wicker Man, they break his fuckin' legs. Thanks for that Neil. Now, it's not revealed that Edward is a big Christian guy. He's just trying to do the right thing. So he doesn't have much to scream out at the end. And while the ending of the original was a bit inspired cause Edward Woodward gave a good performance, Nic Cage pretty much went "Eh I'm gonna die" and just slumps forward. Fuck, I hate this movie.

I have nothing else to add. Watch these two videos and enjoy the stupidity that is Nicolas Cage's "The Wicker Man":

PS: Wanna know one of the reasons Nic Cage is broke? 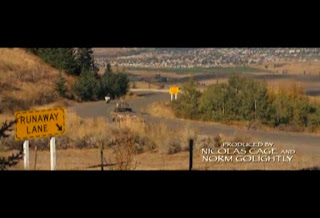 Was really hoping for more with this one, but at least Leelee Sobieski is in it.