LAMB's In The Director's Chair: Near Dark

There's been one feature on the LAMB that I haven't participated in yet cause it normally focuses on GOOD movies and GOOD directors. I fought hard to get Ed Wood his due and thankfully, my fight wasn't for nothing cause he'll be coming up later. But for now, let me explain a bit about this feature. 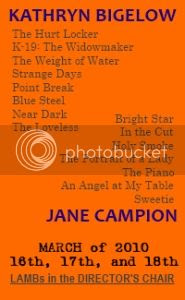 Every other month, the dude that runs this (forget your name, sorry dude) picks a director and anyone who's a LAMB writes something either about the director or their films. The past directors have been about Martin Scorsese, Clint Eastwood, and Danny Boyle, all who made at least more good movies than bad. This time around, they focused on Kathyrn Bigelow, who directed a wide array of random crap.

Before getting to today's movie, here's all I know about Kathryn Bigelow:
-She used to fuck James Cameron until he left her for Linda Hamilton. In a stunningly uncomfortable moment in history, both she and Cameron are up for Best Director and their movies are both up for Best Picture. Battle of the Exes indeed.
-She directed a few movies, two of which I'll be taking a look at, starting with "Near Dark".
-She named her son Deuce for some reason.

With that said, let's take a look at "Near Dark". If you were to look at the DVD cover for this movie, you'd say to yourself "Holy fuck, they made a 'Twilight' rip-off!" I mean look at this: 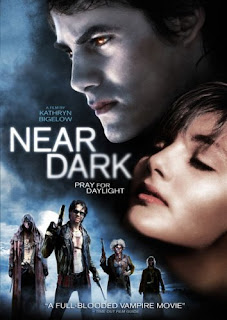 Weird this is, that cover is completely misleading. Nathan from "Heroes" doesn't look anything like that in the movie. Whatever.

Movie starts with Nathan from "Heroes" playing Caleb, a Urban Cowboy if you will. He's out on the prowl one night when he meets a rather plain looking chick named Mae. Caleb instantly falls for Mae and they go driving around Hickville, USA. Soon, Mae starts acting weird, demanding to be home before the sun comes up. Caleb acts like a douchebag and does the thing all douchebags do when they're desperate for some: take the keys out of the ignition and drop them down his pants and says "you gotta find them first". Mae's response to this is to bite the shit out of his neck and run for cover. Caleb finds this cute and is about to go home when his truck stalls. That's what you get, douche. 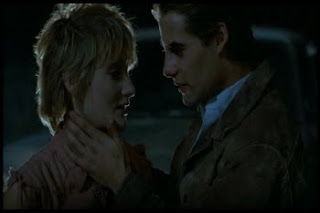 Unlike other vampire films where there's a 24-48 hours incubation period, Caleb's transformation is instantious when he starts burning in the sunlight and doesn't feel too good. As he's about to go home and get yelled at by his dad, dude who plays Jack Deth in the "Trancer" movies (Series coming soon to this site/blog), a RV comes out of nowhere and scoops Caleb up.

Inside it is dark and HOLY SHIT IT'S BILL PAXTON! AND LANCE HENDRIKSON! What, did Kathryn ask James for his roll-a-dex? Can't wait for the William Hurt cameo. Anyway, Bill Paxton, at least 80's Bill Paxton, plays his usual annoying ass self, chewing major scenery here asking if he can kill Caleb. Mae says he can't cause he's been "turned". Everyone goes "Aw shit!" 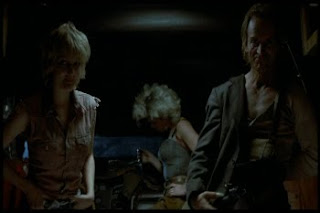 Here's the thing about this movie. The word "vampire" is never said in this movie. They say "turned" or "changed" but never "oh I'm a vampire". I dunno if they were going for an artistic thing or what. "I DARE not utter the V-Word! Give me my Oscar!" Whatever, lady, they're fuckin' vampires.

Lance Hendrikson is the leader (of course) named Jesse. In a way, this gang is like a family. Jesse is the dad, he's hooked up with Diamondback, who looks like a truck stop hooker; Bill Paxton is the older son and there's a young boy named Homer. Homer is the second or third most annoying character in this movie. He's your typical kid who has to make up for being a kid by acting way older than everyone else. When he introduces himself to Caleb he goes "My name is Homer. If you mispronounce it, I wouldn't want to be you." How the fuck else are you going to say "Homer"? Hoom-er? Hammer? Huu-mar? Shut up kid.

They're forced to take Caleb on the road trip from hell and much of the movie is Caleb trying to fit in while Daddy Jack Deth and Sarah, Caleb's little sister, look for him.

The Gang try to get Caleb to kill someone so he can feed on their blood. There's a long drawn out scene where Caleb and Mae are picked up by a truck driver and he teaches Caleb how to drive a truck, while Caleb tries to figure out how to drink his blood. Caleb is like "Fuck that" and settles on Mae's blood, who isn't too happy with that. There's a brief scene where Caleb wants to go home and he gets to a bus station and buys a bus ticket to go home, but his impending urge for blood makes him get off the bus.

In other words, Nathan from "Heroes" spends 80% of this movie hunched over, holding his stomach.

Jesse is sick of Caleb and Bill Paxton wants to chew some more scenery by killing him, but Jesse gives him one last chance. As you can tell, I wasn't liking this movie. Then this scene at the bar happened and I thought "hey finally, something's happening and it's kinda good."

So the Non-Vampires-Who-Are-Totally-Vampires arrive at some hole in the wall bar with maybe 3 customers and one by one, the family kills each person. Jesse stabs the waitress, pretty much in front of the bartender who doesn't do anything about what's happening here and he, Diamondback, and Homer drink on her blood. Bill Paxton proves he's the best at overacting by munching on some homebre. They send Caleb to kill the bartender but he blasts him with a shotgun. But since they're "changed" he doesn't die. Bill Paxton takes over and slits the bartender's throat with a spur. 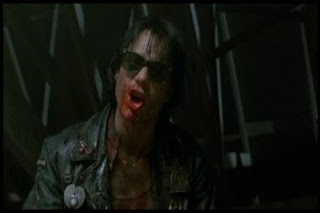 This leaves one guy, who looks all of 20. Mae messes around with him for a bit before Caleb gets a bit jealous and tries to munch on him. While this is happening, they light the bar on fire. Caleb pusses out on the drinking of the 20-year-old's blood and lets him leave. Somehow Jesse saw this (I guess Vampires are psychic too?) and is pissed...but they let him live for another day.

The next day, the police are knocking on their hotel room door, but it's daylight outside. Caleb says he'll sacrifice himself to go get the van outside and drive it into the hotel so they can get in without getting (too) burnt. He does this and redeems himself with the family and they all treat him nicely again.

Mae and Caleb go to make out some more and Homer, cause he's a tough kid you know, goes outside for a smoke. Now it's said that these people don't age after they get bitten, so this whole Homer character is disturbing really. It's revealed later that Homer "turned" Mae, which means a 10-year-old kid was pretending to make out with, I guess, a 18-21 year old woman. And lord knows how long Homer was 10-years-old. So in a way, he's like Edward in THAT OTHER VAMPIRE movie and is like 200 years old.

I bring all this up for a reason, mainly the next scene, and the rest of the movie really. Homer spots a little girl buying a Coke and if you been paying attention you probably already know who this girl is. Yep, it's Sarah, Caleb's sister. Imagine that.

Homer FALLS IN LOVE with her and takes her back to the hotel room to watch TV. And in this movie it's either "Daytime, where it's always bright as hell outside" or "JUST about to be Sunrise". Well, here it's "just about to be sunrise" so nothing's on TV. Homer starts acting creepy when Caleb returns and is reunited with Sarah. Bill Paxton found Daddy Jack Deth and it's a happy family reunion. Upon seeing his family, Caleb realizes he wants to go back.

Jesse isn't too happy with that and a shootout occurs, with Jesse spitting up the bullets. Caleb and his family manage to get out of there and into Daddy Jack Deth's truck. Caleb reveals what he is (not a vampire) and Daddy Jack Deth says he knows how to fix that.

Wait, Jack Deth, who is a vet in this movie, KNOWS how to cure vampirism? Ok, I'm game. How? 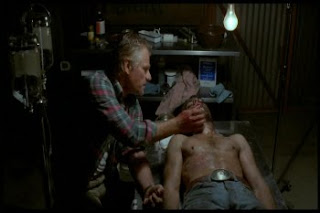 (Editors note: Jason's about to get really angry)

Yes, this fucking works and Caleb is no longer a vampire or whatever the fuck these people are called in this fucking dumb ass movie. Ugh god. So Caleb is back with his family but since the movie didn't stop, you know something's about to happen, like the gang is gonna show up.

Of course they make us wait for it and it first happens with Mae showing up by herself. She's upset Caleb is "human" and leaves. Then Caleb finds that Sarah is gone. Gee, really? I'm surprised. I'm assuming it's Bill Paxton that slashed all the tires, so Caleb goes and gets his prized horse and rides into town and now it's a fuckin' western.

Bill Paxton shows up, which spooks the horse, and they fight for a minute before a semi shows up. Hey, remember that scene earlier where a truck driver was teaching Caleb how to drive? I wonder if that'll come into play! Well, Bill Paxton kills the driver with his overacting, leaving Caleb to get into the cab and run Bill Paxton over. But this doesn't stop him, so the only way to do it is to make the semi jack knife.

Oh hey, you guys reading this, did you know? That if a truck ends up doing a jack knife, IT FUCKING EXPLODES FOR NO REASON??????? ARRRGH!!! I hope James Cameron wins BOTH Oscars, lady. 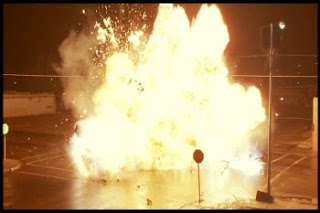 Well, this stops Bill Paxton but now he has to go up against everyone else. And guess what time of day this happens? Right at dawn. Don't these people get up at least by 10 PM? Jeez. We see Homer in the back of Jesse's car, trying to make out with Sarah. Eww, movie. Ew. Thankfully, Sarah's a fighter and manages to get away. Caleb grabs her and they start running until Caleb trips and they both fall. Sarah starts running on her own...and manages to get caught again. Fuck.

Mae, however, has a change of heart and jumps out of the car with Sarah, getting pretty burnt. Caleb shows up with a dark blanket to save Mae. Homer runs out of the car and while chasing after Sarah, just blows up. Hm, maybe vampires blow up. COULD explain the semi. Nah, that was still a fuckin' stupid scene. 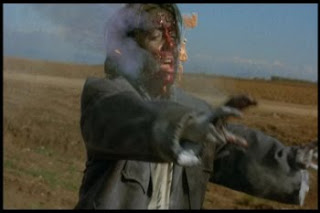 Jesse and Diamondback start going after Caleb, Mae, and Sarah but they too go "fuck it" and blow up. I love when a movie just shrugs its shoulders and says "whatever". Well, since Daddy Jack Deth knows the secret of curing vampires, he cures Mae and they live happily ever after. Excuse me.

This movie has a cult following and I don't know why. It's not fun to watch like some cult films (Rocky Horror, Evil Dead, Basket Case) and it's definately not any good. It's like no thought was put into this, and I think I know why. This movie came out in Fall of 1987, a bit after "The Lost Boys" came out. So I think whoever came up with this movie was just cashing in on Keifer and the Coreys. All it took was whip up their own vampire movie, give James Cameron a blow job to get Paxton and Hendrikson's phone numbers, and viola! Shitty movie! See you in hell, "Near Dark".