This is my second entry in the LAMB's In The Director's Chair feature, talking about a Kathryn Bigelow film. Since I wrote about "Near Dark" I learned a couple of things:
1. I'm the biggest asshole in the world for hating THE GREATEST VAMPIRE MOVIE EVER MADE.
2. "The Hurt Locker" is possibly the BEST MOVIE EVER MADE PERIOD!!

Since my last review, The Former Mrs. James Cameron has won Best Director and Best Picture for "The Hurt Locker". Consider I only seen two films by her, I'm starting to think if the Academy is like "Eh, we gave it to some black people a few years ago, let's give something to a chick now. BOOZE!" I'm not saying she's a bad director, but her films leave something to be desired.

Keanu plays the stupidly named Johnny Utah, and he is AN! F! B! I! AGENT! sent to the headquarters in L.A to handle robbery cases. Johnny is partned up with Angelo, played by the loveable Gary Buesy. Yes, he plays a good guy. He's the crazy good guy, but a good guy nonetheless. 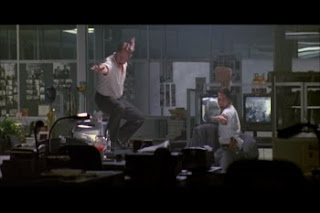 Angelo has been trying to solve a string of robberies being done buy a group of robbers called The Ex-Presidents, because they all wear rubber President masks, like Nixon, Reagan, Jimmy Carter, and...LBJ? Is there a LBJ mask? Ok... Angelo suspects the robbers are surfers cause of something to do with dirt samples and wax samples, so he sends Johnny undercover to learn how to surf and yes, the F.B.I will pay him to surf.

After wiping out a few times, Johnny meets Tyler (Lori Petty in the girliest role I've ever seen her in) and as cliches go, she hates his guts at first but then grows to love the lovable wooden actor. Tyler introduces Johnny to Brodhi (Patrick Swayze), who is an adrinaline junkie. Not only does he surf, he likes to sky dive and...that's it. 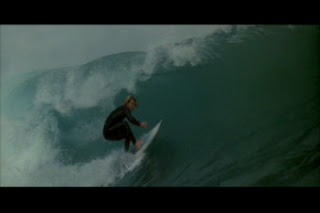 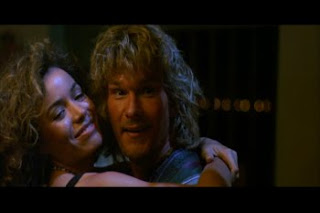 So if I was back in 1991 watching this movie and I knew NOTHING about it, I would've said to myself "Jason, stop talking to yourself and watch the movie. Oh but The Ex-Presidents is Brodhi and his friends". But this movie wants to string us along for another hour before telling us that.

Johnny thinks the robbers is this gang of nazi surfers (Surf Nazi's Must Die, anyone?) and one of the gang surf nazis is played by, and I'm not shitting you, Anthony Kedis of the Red Hot Chili Peppers. I guess Flea told him how easy acting is. 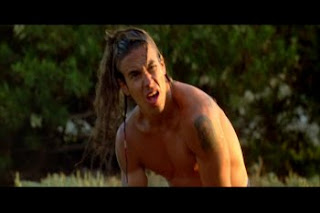 So Johnny and Angelo set up a sting operation to bust the nazi surfers but it turns out they're not the robbers, just drug smugglers. And Tom Sizemore is there as an undercover cop pretending to be a drug smuggling surf nazi. Hey, that makes TWO washed up actors that'll eventually lose their fucking minds later in life in this movie. Keanu, you gotta up the ante a bit. 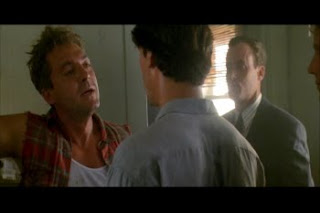 Finally, Johnny realizes Brodhi and his gang are the robbers (after seeing the ass of one of the gang...don't ask) and he and Angelo stake out a bank they think is gonna get hit next. While Buesy eats meatball sandwiches, the bank is robbed and Johnny goes into action, chasing after the Ex-Presidents. Johnny totally blew his cover by calling himself an agent and Brodhi, who's Reagan, doesn't kill him.

There's a long chase scene that goes on forever all through L.A and through people's home's. Finally, they end up at the L.A river, which looked like shit back in 1991 so I can only imagine it now, and you know that clip they shown in "Hot Fuzz"? That scene totally happens here. I love "Hot Fuzz".

Anyway, cover is blown and Tyler finds out and gets pissed and leaves. Brodhi decides to get back at Johnny for being a cop by kidnapping Tyler and having her in a secret location that only he knows about. The next day, Brodhi makes Johnny go sky diving with them for no real reason. Then he reveals he has Tyler and the only way she'll live is if Johnny comes along and rob one more bank. 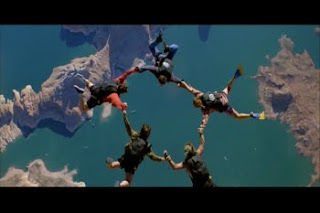 This bank robbery goes bad when one of the bank patrons is a cop and he starts shooting Ex-Presidents. Brodhi kills the cop and knocks out Johnny, leaving him there. For some reason, Johnny is arrested but Angelo steps in and saves him and Johnny reveals where Brodhi is going.

It's an airport. There, there's another shootout where Angelo is killed and Johnny is forced to go with Brodhi to get Tyler, which is in the Mexico desert. Brodhi lives to his word and lets Tyler go, while Brodhi and another dude drive off into the sunset.

Flashforward to, oh I dunno....a year later. For some reason, Johnny grew his hair out and now we're in Australia. Well, I do know why. Earlier, Brodhi talked about how every 50 years, there's a killer wave that hits the coast of Australia and he wants to ride it. Well, Johnny tracks Brodhi there and arrests him, but Brodhi begs to go surf one final time before going to jail. After thinking about it for 10 minutes, he lets him go and....Brodhi drowns. Well..bye!!

Despite the hype and cult status of this movie, it's not very good. It's not too bad either. There is one moment that hurt me a lot. Johnny is talking about following Brodhi to all the places he went and Keanu says "Then he stopped by PATRICK'S ROADHOUSE". Ugh, god. That was painful to even write. That's like saying "Hey let's get inside Keanu's Phonebooth" or something. Jeez. Have no you shame, "Point Break"?

Awww... I was hoping you comment on what I thought was by far the best part of the movie. Not the "Hot Fuzz" moment (though that's iconic in itself), but when, during that long-ass chase scene, Swayze throws a dog a Utah and Utah PUNTS THE DOG.

I stopped and rewatched that over and over until. I thought I was going to pee myself, I was laughing so hard.

Oh, I didn't know that you were going summarize the whole movie.

People thought this movie is awesome. I thinks it's awesomely bad.

I don't think it's Bigelow's fault. I think it's the lackluster script.

I've lost so much respect for you, Jason. You're a bigger asshole for not loving the shit out of this. :(

Fletch, I can't tell if you're serious or not. I liked it. A lot. Really. Just that whole "Patrick's Roadhouse" line made me cringe. I loved the cheesyness of it and as Nolahn pointed out, I forgot about the dog kicking scene. So yeah I did love it in a bad sorta way I guess?

Anyway, again dunno if you were serious or not.
-Jason

Two stars doesn't sound like "a lot." Nor does "it's not very good." So I was being semi-serious with a dash of Soto Snark thrown in there.

I'd actually forgotten about the "Pat's Roadhouse" line. Sure, it's pretty terrible, but is it any worse than Bruce Willis singing that song from Pulp Fiction in Die Hard 3?

I just feel horrible that I got you to hate me. The only people I don't mind hating me are faceless internet dwellers. But you...you broke my heart, Friedo.

Anyway, I was all prepared to give it three (maybe even 4) stars when the Roadhouse thing happened. And I didn't pick up on the Die Hard 3/Pulp Fiction thing until way later, whereas in "point Break" they hit me over the head with it.

I hope we can agree to disagree and not let this ruin our friendship. If it means anything, the Rifftrax to this movie is hilarious.
-Jason