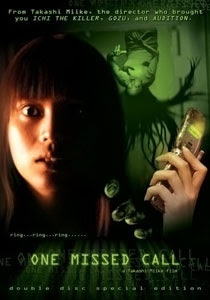 It's Meatloaf time and this time someone thought it'd be a good idea to do Japanese Horror. Here's the thing: I don't know that many b-movie japanese horror films. I could've submitted "Bio Zombie" and be done with it, but I like to open myself up to new movies that I haven't seen. So I was gonna go with the super crazy Japanese horror movie "House", which I been dying to see.

Then Nolahn, my podcasting partner, got to it first. Well fuck.

So desperately grasping at straws, I started looking into the all those movies that ended up getting American remakes and after flipping several coins and pulling names out of hats, I came to "One Missed Call". Oooh, a kill cellphone movie! Sounds bad.

Well, it's more than that. And it's confusing as fuck.

A group of people are meeting for dinner and while in the bathroom, two girls, Yoko and Yumi, are gabbing away about shit when Yoko's phone ring but in a weird ringtone she's not familar with. When it went to voicemail, she finds the call came from two days in the future and the message Yoko saying something about rain and then screaming. Maybe it was raining...DEATH!!!

They kinda shrug it off and they move on with their lives. Two days later, Yumi calls Yoko, when Yoko repeats the thing about rain, then she's suddenly thrown over a bridge onto an oncoming train. Classy.

Yumi's freaking out, so she goes to talk to Kenji, who also got a similar message. But his message was from...5 minutes from now! OH FUCK!! He ends up saying the thing he heard himself say (...I think that made sense) and ends up falling down an elevator shaft.

There's a subplot about Yumi coming from an abusive home and how she's afraid of peepholes. I think this factors into the ending but honestly, I don't know. I just thought I should mention it.

Next up is Natsumi, who gets the call of death but this time, DEATH TEXTS!! Well, it's actually a video of something happening behind Natsumi. It's not very clear. In fact, anytime it wasn't daytime outside, it was hard to see anything. Hey, Japan! BUY A LIGHT!

Natsumi and Yumi freak out so badly they cancel their cell phone services and recycle their phones. Somehow a local TV show hears about Natsumi's phone call and want to exploit her. The Host says there's an exorcist that can help her and Natsumi, even though she's not possessed, says sure and is carted away by a strange TV show host.

Yumi then meets Yamashita (Christ, these names are getting longer) who's sister died after a mysterious cell phone message some months ago and now he's trying to get to the bottom of this. Here's where things get confusing and I sorta lose interest.

Not only was the DVD skipping every 2 minutes but Yamashita was acting like he was a cop when he wasn't. People were just letting him talk to abused kids in foster homes and rummage through missing people houses. They try to stop this stupid exorcism thing on TV but it's too late. In this movie's first cool scene, Natsumi's body parts are twisted around so violently she loses her head, while her body keeps walking for a moment. Um, more of this, please!

Well, we gotta wait awhile. There's more story that I wasn't following. So there's some chick named Marie who had two daughters. I THINK Marie was making her kids get Munchausen Syndrome By Proxy. Now here's my question: why are we so concerned with her?

I have no fucking idea. This Marie chick went missing and the youngest daughter is in a foster home. There's an older girl who's also missing but no one seemed concerned with her. Yumi eventually gets the call of death and now it's personal!

They figure out that Marie use to work in some hospital so Yumi goes to check it out and here the movie had my interest for a bit cause the sprit was following her in super creepy fashion. It would even start putting jars outside of doors. Man, who does she think she is, going around leaving scars? Collecting her jar of hearts?

If you're still around after that reference, let's wrap this up.

Yamashita discovers Marie's body in the hospital, which saves Yumi from not getting killed. Marie's body comes to life and Yumi calls it Mom and begs for forgiveness. Um.....what? I looked into this and Marie is never mentioned anywhere as being Yumi's mom, so...WHAT THE FUCK???

The cops show up and everyone thinks it's over. But then they find a tape that shows the missing daughter was the abusive one and she would hurt the younger kid. Marie freaked out and left. So........questions!

1. How did Marie die and end up in the hospital?
2. The missing daughter is never shown dying so how did she die?
3. The cops said next to Marie's body was a cell phone with all the phone numbers of all the previous victims, including Yumi. WHY? HOW? How do they know each other?

None of this is making sense. Well, hang on.

This was directed by Takashi Miike, who CAN make some interesting and fucked up movies (Ichi the Killer, Visitor Q). But this, along with "Audition", is just boring and kinda stupid. I'm sorry, but it's true. This one, at least, had some good effects and some creepy moments but the story was confusing as fuck. It doesn't need to be so complicated. Tell me, why do you have to go and make things so complicated?

I filled my chick rock quota for the day. Later.

Dude, I noticed you are going to tweet Bachelor Party in the Bungalow of the Damned. Let me tell you, that is a terrible idea. If you make it through without choking, mad props. (btw, you should check out my post on it if you haven't) Adios muchacho.