God, it feels like it's been fucking forever since I wrote anything. Yeah, I'm on a "vacation" but that turned into a "sick leave" but whatever. If you been dying to read some stuff from me, you have the following to look forward to:

1. NEW TWITTER EVENT!! I didn't get any feedback on the first one I had when I covered "Frankenhooker" but that's not gonna stop me from doing it again!! Yes, I'm that kid who after falling off the building while doing a cool stunt and survives, gets back up and tries the stunt again. Probably because I'm part Polish. Anyway. Coming to @invasionbmovies on January 26th at 9PM E.S.T is my live Tweeting of "Bachelor Party In The Bungalow of the Damned"! If that's a movie that doesn't beg me to review it, I don't know what does. So yeah, if you're on Twitter, hit me up and on that night you'll see me make comments about this movie like "Oh crap!" and "She's hot!" and "NOOOO!!!!" This movie sounds worse (or better?) than "Frankenhooker" so it should be an interesting ride. 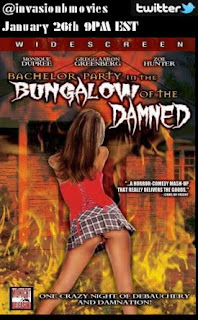 2. Regular reviews will resume on January 28th when I update my review of "Urban Legend: Final Cut" aka "Urban Legend 2". And if you don't listen to "The Lair of the Unwanted" I don't wanna hear about it cause it'll upset me. And that means you missed me announcing that I'm changing my reviewing schedule from every Friday to every OTHER Friday cause doing that with this crappy ass job I have is just not working out. So this will make things a lot easier on me and you....and you and me...no matter how they toss the dice....oh sorry.

Sorry, when I get that song in my head I have to sing it.

Anyway finally I was in this:

A post including The Vlog is always worth making. :P