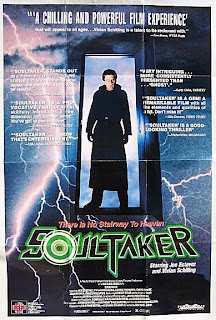 "Soultaker" was featured in a pretty famous episode of "Mystery Science Theater 3000". It was not only the episode that kicked off their tenth (and final) season, but it featured the return of Joel Hodgeson and Frank Conniff. Sadly, Joel didn't partake in the riffing but it was awesome to see both Mike and Joel standing side by side, making off-the-cuff jokes about comparing each other and whatnot.

The movie on the other hand...oh boy. Starring Joe Estevez (Martin Sheen's brother) and written and co-starring a chick named Vivian Schilling. It tells the story of a group of friends who die in a car accident and are not being chased by a "soultaker", sort of a Grim Reaper of sorts, played by Joe Estevez.

The group of friends include Zach, his ex-girlfriend Natalie, and their friends Brad and Tommy. Brad doesn't like Natalie cause she's "slightly more rich then they are", which is like saying "I hate that person cause he has slightly more shoes than I do".

They're driving to the ever fun Summerfest when The Angel of Death (Robert Z'Dar) tells Joe to take the souls of our four heroes and he only has 12 hours to do so before...I don't know, their soul's expire or something. So Joe causes a car accident, which I think is cheating if you ask me, and succeeds in taking the souls of Brad and Tommy but it's Zach and Natalie that Joe has a hard time with.

Then there's the sub-plot of Joe remembering his wife in his previous life and she just happens to look like Natalie. Did I mention the chick playing Natalie wrote this movie? Just in case that wasn't clear. So the rest of the movie is Zach and Natalie NOT KNOWING THEY'RE DEAD and they go get help from Natalie's Mom, who's really just Joe in disguise, so there's some pretty creepy moments.

Eventually, they discover that Zach and Natalie's bodies are on life support at the hospital and they have to get back into their bodies before their parents pull the plug. So this leads to RUNNING IN THE HOSPITAL: THE MOVIE! It must be fun to run in a hospital.

I won't tell the ending cause frankly it's stupid and retarded. I recommend watching this movie in MST3K form cause it's MUCH more enjoyable. The movie itself is just weird, kinda slow, and just overall stupid. Plus having the screenwriter cast as the main chick is just so vain. I guess she thought this movie was about her.