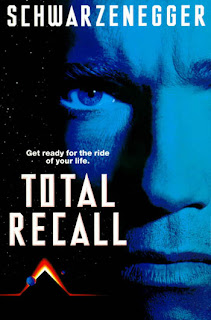 I was TOTALly gonna watch this movie then write about it but I have seen it a few times and I think it'd be great if I could just RECALL what the movie is about based on my memory. That should be fun! Here we go!

Arnold Swartzenegger is a guy in the future. He's bored with his life, so he hears about this company called Rekall, spelled wrong cause spelling things wrong is PHUN! So he goes to this company and they tell him the scenerio he'll be playing, which is he becomes a big hero and at the end he gets the girl.

But in the middle of it, something goes wrong and the machine starts malfucntioning. Arnold leaves and then he finds out his life is all sorts of fucked up. He learns that he's actually a secret government spy and everyone is out to kill him: his best friend, his wife played by Sharon Stone, and even himself!

Arnold is told by a suitcase playing a video of himself to wrap a wet towel on his head, then pick a huge red glowing booger out of his nose with some pliers, then he's gotta go to Mars cause Mars Needs Bodybuilders! And to be librated with air or something.

But he's gotta go in disguise, so he goes as a giant woman and this works for .00001 seconds until the disguise just randomly blows up. So now Arnold is on Mars, he meets up with the chick from "Falling Down", and then some dude shows up telling him none of this is real and that he's still stuck in the Rekall machine. Arnold doesn't believe him so he kills the dude.

Arnold runs around Mars, gets trapped outside Mars, nearly suffocates, then some guy with a small dude in his stomach appears and says stuff to Arnold. I remember then some old guy chasing Arnold around and he fell down a lot. Then Arnold and girl from "Falling Down" turning the air on for Mars, then enjoying a sunset together on Mars annnnd end film.

Directed by Paul Verhooven aka "Director of Showgirls".

I had to watch this movie a few times cause the first time I seen it I was I think 11 or 12 and I didn't fucking understand it. Then when I got older I watched it a few more times and I thought it was amazingly cheesy. And I think having not seen it in awhile, I did a pretty good job remembering it. Right?

PS: OH and there's a chick with three tits. Awesome.
Posted by Jason Soto at 9:58 PM

Great "Recall". I seem to remember a girl with three boobs and a man with a face like a Vagina. Oh, and a dwarf prostitute firing an automatic gun with the assured hands of a woman not adverse to the merits of a Rampant Rabbit.

This movie is the shit. I was probably 13 when I saw it and I loved the hell out of it. These days, a lot of the effects look cheesy as shit, but (as with almost of of his) Fil Dick's story still rocks. I'm actually looking forward to the eventual remake of this (though of course it will suck).