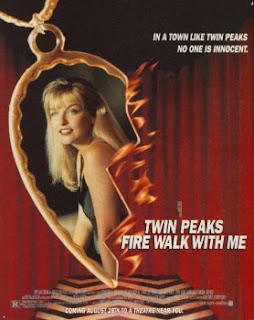 I haven't talked about TV shows and I'm not going to besides "Twin Peaks" only because how fuckin' weird it was.

For those who for whatever reason don't know, "Twin Peaks" was a show co-created by David Lynch and it centered around the murder of a high school girl named Laura Palmer. Her murder was a shock to everyone because she had this good girl image. FBI Agent Dale Cooper (Kyle MacLaughlin) comes in to investigate the murder and, well, weird random wacky shit happens.

In the middle of the second season, they wrapped up Laura's murder and Lynch and ABC, the channel the show was on, decided to dedicate the show to the weirdness of the town, not realizing the appeal of the show was really the mystery of Laura's murder, along with the weirdness. After a few episode of weird "Twilight Zone/X-Files" shit, the season ended on a cliffhanger that was never resolved cause the show was cancelled.

David Lynch, however, wasn't finished and decided to give us a fresh look at Laura's murder by making "Twin Peaks: Fire Walk With Me", a prequel of sorts to the show. The events of the movie take place one week before Laura's murder.

The beginning of the movie, actually, shows the investigation of a girl Cooper mentioned on the show, Teresa Banks, but this time Chris Issak's is investigating it. Banks was found dead the same way Laura Palmer will be a year from now.

Any event, the movie is too weird to get into extreme detail. If you're a fan of the show, it serves it's purpose to explain some shit while at the same time confuse the ever living fuck out of you. It is sorta too bad this is the last Twin Peaks thing David Lynch did. It was probably the only thing he did that made any sense.

I'm not sure Twin Peaks: Fire Walk With Me is one of Lynch's better films but then again it is one of his most interesting. I haven't seen the film for years but I remember it actually being quite a strange, almost, frightening experience. There's some wonderful imagery and Lynch maintains an icy, foreboding tone throughout.