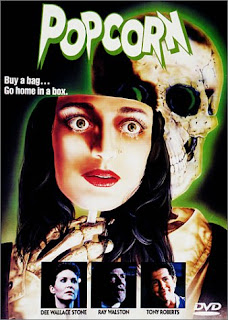 I didn't know much about "Popcorn" prior to watching this today. I didn't even know it was from 1991. But when I saw it on the list, I had a flash to when I rented movies all the time and I went to the horror section and I would see this video cover and thought it was about contanimated popcorn that kills anyone that eats it. It sounded like a silly, but interesting, premise.

What it's actually about is SOOOO much more better.

Movie starts with Maggie have a weird dream about a dude trying to stab her with a knife and calling out to someone named Sarah. Maggie wakes up and immedately records the dream on a tape because she's writing a movie about this weird-o dream she's been having. Her mom, played by Dee Wallace Stone, acts kinda shady about this whole dream thing.

Maggie goes to school and she's a film major. The film department is getting screwed up the ass because the school is focusing it's attention on sports. Fuck you sports. Fuck you. So to generate interest in the film department, one of the students Toby came up with a neat idea: have a classic B-movie festival at a theater put on by the department! Not only will they raise money, but they'll show them sports assholes! Show them real good!

Toby gets some help from Ray Walston, who plays an old time b-movie TV host. He brings in a bunch of props and helps with the movies. This was probably my favorite part, the movies being shown. They're called "Mosquito!" "The Incredible Amazing Electrified Man", and finally "The Stench". Each movie was going to have some gimmick to go with it. Like have a giant mosquito fly through the audience, have electrified seats, and actual bad smells waft through the crowd.

In THIS movie, however, while setting up the theater, the students find a film reel and they put it on. The film shows a guy who looks like Charles Manson killing some chick while he says "I AM THE POSSESSOR" over and over again. Three guesses on what the title of this film is.

The teacher, Mr. Davis, seems to know a lot about this lost film. Fake Charles Manson over there is named-get this-LAYNARD GATES. Laynard. You know, those things you wear around your neck. I know, right? Well anyway, Laynard was a cult leader who gave his followers acid. Film critics laughed at his weird ass movies so he made The Possessor in retaliation and finished the ending live, which consisted of Laynard stabbing his wife and killing the rest of his family, then himself. The bodies were never identified so for all they know Laynard is still out there....

After a montage of getting the theater set up, Momma Dee Wallace Stone is all worried about Maggie. When she takes a werid phone call that tells her to go to the theater, Dee shows up alright...packing mothafuckin' heat! You don't FUCK with Dee Wallace Stone!

So Dee Wallace Stone is outside the theather and the letters start popping off one by one, until a ghostly apprarition makes the words "The Possessor" show up. Oooh, scary! Dee Wallace Stone goes into the theater to kick some ghost ass but sadly she is one-up'd by a manniquin. D'oh!

It's now the next night and it's time for the movie festival. People are packed into the theater and they're all dressed all weird. They have a goodie bag with 3-D glasses and a pin to hold your nose closed for "The Stench". And I gotta say, speaking from experience of going to B-Fest on two different occasions, they got the rowdy crowd feel just right.

During our central plot, we see snippits of the films and they are a hoot. I have to give it up to the writer and performers for doing such a bang-up job mimicing such awful movies. When we do get to the central plot, the killer (who may or may not be Laynard) kills off Mr. Davis using the fake prop mosquito, after the showing of "Mosquito!", then he electrocutes Wheelchair Guy, who's operating the shocked seats, during "Electrofied Man". Unfortunately, the murders stopped after that, which is a shame cause I was dying to see how they'd kill someone using stench.

After the killings there are some amusing scenes featuring Maggie and her boyfriend Mark. Mark, by the way, takes more beatings than Ben Linus on "Lost". It's pretty amazing.

So should I spoil the ending? Nah. I'll end it with these questions:

Is Laynard really back from the dead or does one of the main character have a secret?
How would they have killed someone using odor?
Why is Maggie so god damn hot?
Did Dee Wallace Stone survive?
Will Benson ever figure out how to tell The Tates the secret he's been keeping?

All this, and more, will be answered when you watch..."Popcorn"!

Crappy ass movie, but you gotta love it!!