I'll be honest. For the fifth round I had to finagle my way to getting a challenger. It totally worked and now we have a contender to go up against the champ. So let's get to it, shall we?

IN THIS CORNER! Mass Invader Maria and her pick:

Transformers 2: The Revenge of the Sith or Something! 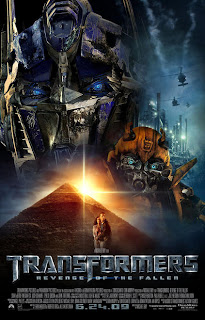 In Q&A format, here's why Maria hates this movie:
Jason: you seen transformers 2?
Maria: with rifftrax
Maria: and that didn't help any
Jason: ok cool
Jason: and now WHY do you think it's the second worst movie you ever seen?
Maria: uuuuuuuh because it sucks the second most
Jason: why do you hate it?
Maria: it made my eyes bleed
Jason: was it the acting?
Maria: there was acting?
Jason: the action?
Maria: i'll now recreate a scene from transformers 2
Maria: gogogogogogogogogogo boom bang kablamoo gogogoggooog gogoo megan fox's cleavage bang boom kablamoo
Jason: was there racial STEREOTYPE robots? there were suppose to be two robots that do a horrible stereotype of black people
Maria: they were method man and redman
Maria: that's how the really are so it's ok
Maria: they were playing themselves
Maria: so I'm ok with it
Jason: in robot forms?
Maria: yeah
Jason: hm i see
Jason: was it super long?
Maria: yeah like 17 hours
Jason: and finally would you recommend this movie, even as a bad movie?
Maria: i would recommend that you don't see this movie unless you hate yourself

Alright! Sounds good (well sounds bad but you know what I mean)! And now THE CHAMPION, going for his third week in a row it's Travis with: 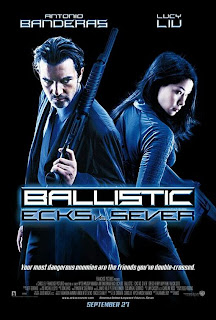 "As a movie lover and someone who claims that "if no one else will see it, I will," I see my good share of really bad movies. I think that's why it was so hard for me to think of the worst movie that I have ever seen. I mean there are plenty of horrible B-Movies that I could have chosen from like Plan 9 From Outer Space or The Room but those, like Dylan said, are way too easy choices. Everyone knows how bad those two movies are and in fact they are so bad that I actually like them. I could have also chosen from any of the other B Movies that I have watched but most of them have already gotten the MST3K treatment and I think that's enough for them. I was half tempted to put Joel Schumacher's Batman and Robin but...I actually kind of like it. Even though Arnold is a horrible Mr. Freeze, the Bat Nipples are distracting and there is even a BAT CREDIT CARD (AHH!! Sorry bad flashbacks), it kinda grew on me as an Adam West-esque cheesiness.

But there is ONE movie I can never forgive. One movie that makes me cringe just saying the name. Hopefully nobody has sat through this horrific mess but it must be said-Ballistic:Ecks vs Sever is the worst movie I have ever seen and probably the worst movie of all time. I mean the directors name is Kaos...which is what this movie is!

Ballistic:Ecks vs Sever should have been at least a decent movie. Antonio Banderas, as much as he butches the English language in this film by passing off as a red blooded American, is a decent enough actor and has done some good action movies (The Zorro series, Desperado) and Lucy Liu has too (Kill Bill, Charlie's Angels) but for some reason they can't even get action right. An action movie can either be one of two things: it can be a mindless shoot em up that is made awesome by its use of 1.special effects 2.over the top action sequences 3.amazing soundtrack 4.cheesy but awesome lines...OR an action movie can be a plot driven experience that is made better by the use of extensive action sequences with huge explosions. Films like Shoot em Up, Die Hard and even Terminator fill both of those kinds of action movie roles and they are all good movies.

But when a movie gets in trouble usually is when it tries to mix both together to make it "better." Well Ecks vs Sever doesn't do that. All the action sequences are really boring. I mean Alone in the Dark and House of the Dead had better action sequences than this, and Uwe Boll is considered one of the worst directors of all time! I mean at least with Boll it had a lot of slow motion and gore. This is just gun fight, gun fight, explosion, gun fight rinse and repeat over and over. You now your film is bad when Uwe Boll looks legitamite as a director compared to your film.

The story (I should put that in quotes) is your typical "we need an excuse to blow up stuff" plot with a kidnapping of a politicians son. Instead of just going with that though they had to put in a conspiracy theory involving Ecks (Banderas)' family being killed, which is only used to make us pity the character. Honestly everyone in this film is so morally corrupt and/or stupid that you really DON'T care about any of them. The title is also totally bogus since Ecks and Sever (Liu) WORK TOGETHER FOR MOST OF THE FILM. There really is no vs...I also got to mention the numerous amounts of plot holes, continuity errors and just one TOTALLY bogus plotline involving the FBI. Alright let me just say something...a lot of films are shot in Canada and they are made to look American. Well when you see street signs, monuments, and building signs saying that its VANCOUVER then bringing the FBI in to investigate just makes the film look dumber than it already is.

A weak plot, boring action, laughable acting and a total lack of effort from Kaos, the director, makes this in my opinion the worst movie ever made. This should be buried with all the copies of the ET game."

Ok you know what to do, which is the worst movie? And if you haven't seen neither or both, just vote on which SOUNDS worse. Does Maria have what it takes to dethrone a champion or will Travis reign for another week? We shall find out!
-Jason
Posted by Jason Soto at 8:29 AM

I still gotta stick with "Ballistic: Ecks vs. Sever". Just sounds that much worse!