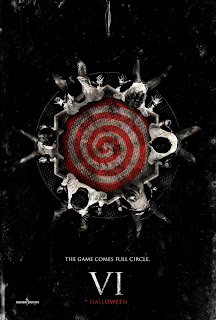 Ah, you thought it was over, did ya? IN YER FACE!

I've been reviewing all the Saw sequels on this blog for awhile, so I might as well keep it going with the last (in that I mean recent) installment.

Apparently, this series is never going to end. This was suppose to be the last one but judging by how this ended, it's not. I don't know how much more they can do with it. I mean is John Jigsaw gonna start looking up bullies from school.

"Hello Nelson. I'd like to play a game. You use to tease me a lot, stick my head in the toilet, and give me wedgies. Now I would like to do the same to you. Your head is currently stuck in a bowl of water full of feces. If you don't get out of this trap in 10 seconds, this machine will pull your underwear so far up your ass the FBI will be pulling it out of your mouth. Let the game begin!"

Honestly, I don't know how to explain the continuity of the story because they release these movies a year apart and I only seen them once. I know at this point Jigsaw is (Spoiler) dead, and Shawnee Smith is (spoiler) dead and some cop that appeared out of nowhere in Part 4 is now (spoiler) the new Jigsaw and Jigsaw's wife is also (spoiler) somehow involved.

So instead I'll talk about the new traps in this movie. The victim focuses on William, the head of an insurance company that likes to deny people more than at hot cheerleader at prom. He denied Jigsaw when he was alive and in the early stages of cancer so now Jigsaw gets his panties in a bunch and kidnaps him and makes him go through four deadly traps involving people he works with.

The first one involves an overweight janitor who smokes and if he can hold his breath the longest, he'll live. Unfortunately he doesn't. So William is free to go and next he finds two people hanging by barb wire. William has the other ends in his hands but he has to let one of them go, and get hung, to save the other. So he has to pick who's more important, an old lady with a family, or a lonely 20 year old.

Next is his lawyer who has to get through a maze full of hot steam. William has to turn the steam off to let her through. But the end of it she has to cut William open to get the key to free her. She decides to go psycho instead and to quote Jigsaw "pays the price".

Finally, is a group of 6 people all who work for William. They play a weird merry-go-round version of Russian Roulette, where William has to decide who lives and who dies. Kinda like him denying certain people of insurance. Oooh snap! William thinks with his dick on this one.

With that done, the other plot is a bit convoluted. The New Jigsaw's Cop Boss and partner know what he's doing so New Jigsaw stops them, tying up some loose ends on that part. But Mrs. Jigsaw has some tricks up her sleeves and double crosses New Jigsaw in a way that makes me think Saw 7: Hopefully The Final One will just be a revenge flick a'la "Kill Bill".

Oddly enough, I liked this one, but I'm not sure why. It certainly isn't any better than the others. By this point in the movie, you really had to have watched the other films. If you go into this blindly you'll be like "WTF?" cause they barely explain/remind you about anything that happened in the previous films. The movie was just over 1 hour and 20 minutes, they could've squeezed out a quick "PREVIOUS ON LOST SAW" or something.

istanbul sohbetsaw the other series, such as 6 superb. Very frightening and extraordinary. very scary, especially the death of the victims.sohbet odaları God have to give anyone such difficult decisions should not leavechat