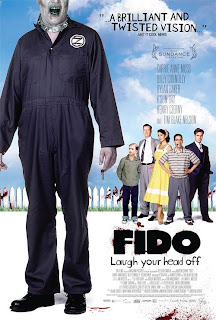 In some weird alternate world of the 1950's (More like Tim Burton's version of the 50's I guess), some space dust came to Earth and caused the dead to walk again. This bought upon The Zombie Wars. Then a scientist dude invented this collar that placed upon a zombie, makes them stop wanting to eat people and completely docile. A company, named Zomcom, was formed to track all zombies and take care of any broken collars. Now, anybody can own a zombie for their own needs. And I do mean their own needs.

That's the premise of "Fido" and it's an interesting spin on the zombie genre. We focus on the Robinson Family and they're not quite normal. Dad (played by Dylan Baker, who'll always be a pedofile from "Happiness" to me, no matter what) is kind of an asshole, in the same way William H. Macy's character was an asshole in "Pleasantville". Mom (Carrie Ann Moss) wants to desperately fit in to the neighborhood. And Timmy is always getting picked on at school for being different.

When the Head of Safety at Zomcom moves into the neighborhood, Mom wants to show off and buys a zombie, which doesn't make Dad too happy because he's scared of them because his dad turned into one during the Wars. The zombie Mom gets is Fido, played by Billy Connolly. At first, Timmy doesn't like the new family zombie, but when he stares away two bullies, Timmy names him Fido and starts treating him like a pet.

The movie is pretty much a black comedy by default since it deals with zombies. Fido's collar gets broken and he accidently kills the nosy bitchy neighbor Mrs. Henderson, which causes all sorts of other problems. Timmy hides the body but the two bullies know what happened and treaten to kill Fido and Timmy.

Well, Fido doesn't attack Timmy when the collar is off cause he likes him, but he does attack the bullies. Fido is then sent to get Mom in a total spoof of "Lassie" to help Timmy, who's tied to a tree, from getting eaten by the now zombie bullies.

When Mrs. Henderson's body is found (Timmy removed the head prior to burying, which is how funerals are done now) Mr. Head of Safety find's Timmy's baseball and sends Fido away. Timmy finds out through Mr. Head of Safety's daughter that Fido is still alive and working in a factory and now it's up to Timmy and his weird neighbor who use to work for Zomcom and now fucks a female zombie to break Fido out.

It is a good movie and I highly recommend it. I'm not sure if the movie is trying to be some sort of satire or a message or what but it is a good movie, if not a bit weird. Despite the weird neighbor having a zombie girlfriend, we don't see zombie tits. Can't win them all.