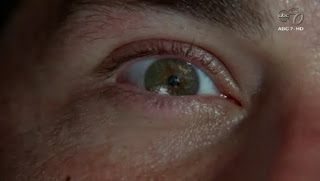 I woke up and was looking up at some sky. The weather was warm and I can hear ocean nearby. I sat up and looked around. I was in some jungle. I hear rustling. I turned and looked and saw, well not to sound mean or anything but he was a fat guy. And kinda hairy.

And that's when "Dude" Dude pointed to a small wooden shack.

"He's there?"
"Yeah dude, do I stutter? Now go, he's probably waiting or something. I don't know. Stupid island."

And that's when the fat hairy "dude" dude walked away. I stood up and headed towards the shack. I opened the door and inside was a brightly lit room. Sitting on the floor was a man who looked like Elvis wearing pink bunny ears.

I sat across him on the floor.

"You wanted to meet me?"
"Yeah. I have a cool idea and I wanna know if you wanna help me out with me."
"Proceed."

I went on to explain that I been reading his site since he joined the mysterious secret society called The LAMB and I liked what he had to say and that he and I think alike. After talking for a bit, I found we had a lot more in common. Nohlan sat there, nodding his head, which made the pink ears flop back and forth. I was waiting for them to fall off his head honestly.

"What are you trying to say?" Nolahn said, impatiently. I have been talking for two hours.
"I want to do a podcast. And I need someone who knows a lot about watching bad movies AND someone who appears to be on their computer a lot. I want to know if you'd help me do my podcast."

"Well...I was suppose to help dismantle some bomb. But...a podcast sounds like fun. Let's do it!"

So I am proud to announce that coming later this month will be the first episode of "The Lair of the Unwanted", a podcast featuring me and Nolahn of "Bargin Bin Review". We already got a few episodes planned and hopefully recording will happen next week. I will post the episode up here when it is finished. I hope you guys enjoy it.

Now there was the problem of getting back home.

I nodded. I knew where he was going with this.

"But how do I get back?" I asked.
"See this big wheel behind me? Turn it clockwise 108 times. On the 108th time, you will arrive back at civilation. It's just a matter of finding your way back to Indiana. I must go now. Jacob is calling me."
"Who's Jacob?"
"Indeed. Be well my friend."

Nolahn left and I sighed, turning the wheel 108 times. Sure enough on the 108th time, a white light washed over me and soon I found myself...in the desert. Dammit. Oh well. Glad we're not doing the podcast for another week.
-Jason
Posted by Jason Soto at 8:00 AM

Well... Okay then. That was an interesting twist!

How has that line not worked its way into an episode of "Lost"?

Nolahn: Cause they don't have me as a writer.