This feature is only 7 weeks old yet, the last four weeks have been the most exciting thing we've seen yet. It's kinda crazy really. I've never seen SOOOOOO many people hate one just ONE movie. Sadly, no matter what the outcome is, this is the last week "Ballistic" can participate. So with that said, here is this week's challenger!

IN THIS CORNER! Wings from Caffeinated Joe! And his take on:

Land of the Lost! 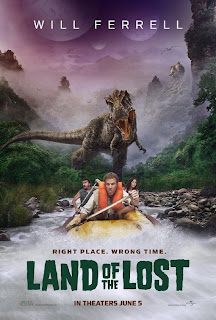 Ugh. This movie was just bad. There are a few funny parts and I am sure you saw them in the trailer. Everything else is just blah and boring.

I am a fan of the original show. And I would have been a fan of a remake that was done well. This changed things that didn't need to be changed and tried to force humor in where it just did not work. Will Ferrel was great as Buddy the Elf, but since then, I have just not found the dude funny.

The sad thing is that the higher budget and the modern effects could have made a Land of the Lost flick that was both true to the original and awesome for today. Sadly, they went and blew the whole thing.

I know you guys are already familar with "Ballistic" so no introduction is needed.

On another note, I SERIOUSLY need people to keep this going. So if you been voting, you should think about joining. It's fun and who knows, you might go on to be a 5-week champion like Travis. Just shoot me an email (invasionofthebmovies at gmail dot com!)
-Jason
Posted by Jason Soto at 8:23 AM

Awesome! I have to go with my choice, since the Land of the Lost 'movie' is pure dino-crap!!!

Good choice. I was just mentioning to someone the other day that Land of the Lost was total crap. IMO not the worst but definitely one of the worst recently (I think it beats Transformers)

Ya know Wings I was just reading your blog. Its really cool actually. I quite enjoy it. Hey if my last week does nothing else it will show me a really cool blog...besides this one but Jason already (or should) know I love this site